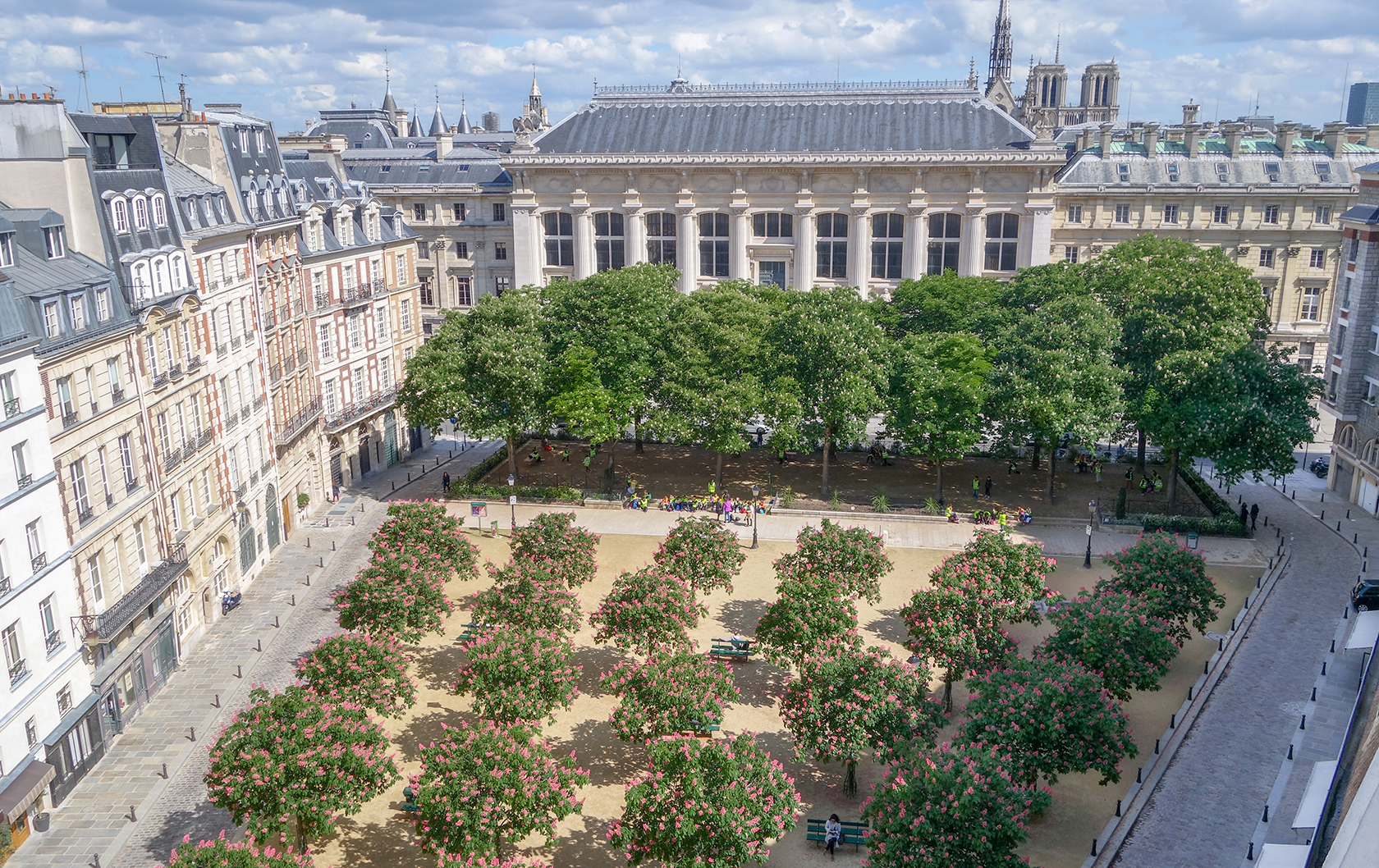 It’s easy to love a spot as charming as Place Dauphine. Its chestnut trees with their pink blossoms, the sound of shoes clicking along its cobblestone streets early in the morning, the familiarity of a pétanque game or kids running through the trees, and cafés so little their tables and chairs seem to spill out onto the sidewalk. But at Paris Perfect it’s safe to say we’ve truly fallen in love with Place Dauphine. As Madelyn and Philippe restored La Place Dauphine—uncovering layers of history back to when it was built in the 17th-century—it became a love story for Paris Perfect. If you’d like to be surrounded by all this history during your stay, find out more about our luxury vacation rentals at La Place Dauphine! 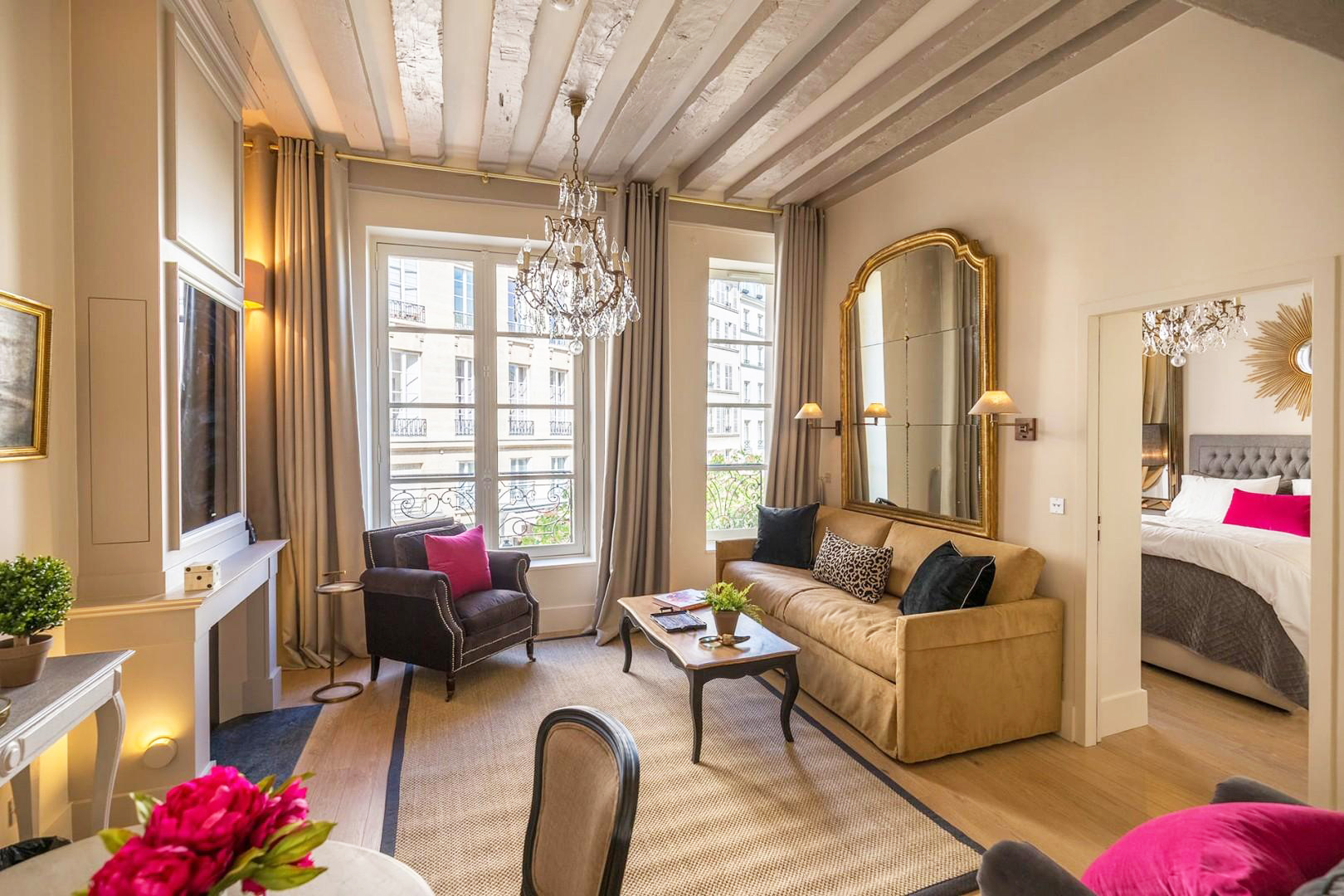 You will be surprised just how much history is packed into this one picturesque little square in Paris. We love sharing about all the fascinating details we’ve uncovered over the years, so now let’s look at some of the most important and intriguing moments from the past at Place Dauphine. 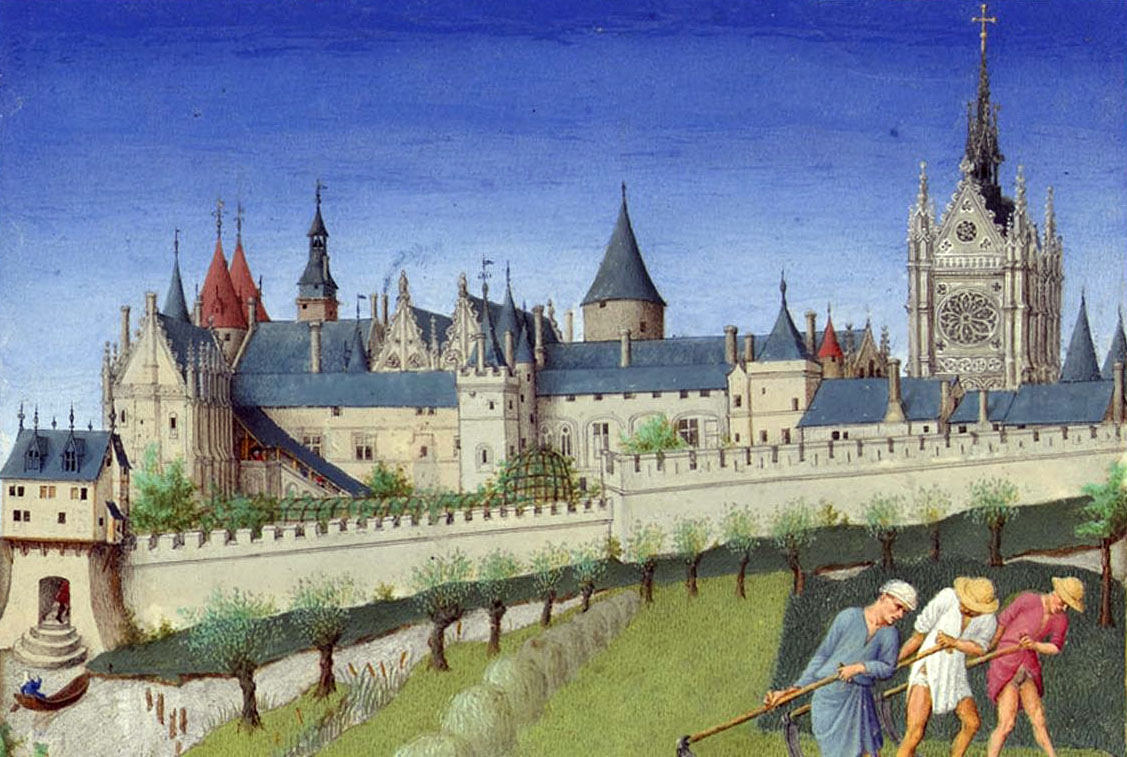 The 6th Century – Before Place Dauphine

While Place Dauphine—as we know it today—wasn’t built until the early 17th century, the location has long been a coveted spot. The Île de la Cité is the oldest part of Paris, where a Gallic tribe called the Parisii first settled around the 3rd century BC. Set at a crossroads for trade, the location flourished and by the 6th century the western side of the island was the home to the Palais de la Cité. It was here on this island where the kings of France lived for centuries and where St. Louis brought the Crown of Thorns to Sainte-Chapelle. At the tip of the island, the King’s Garden was a place of respite and beauty. 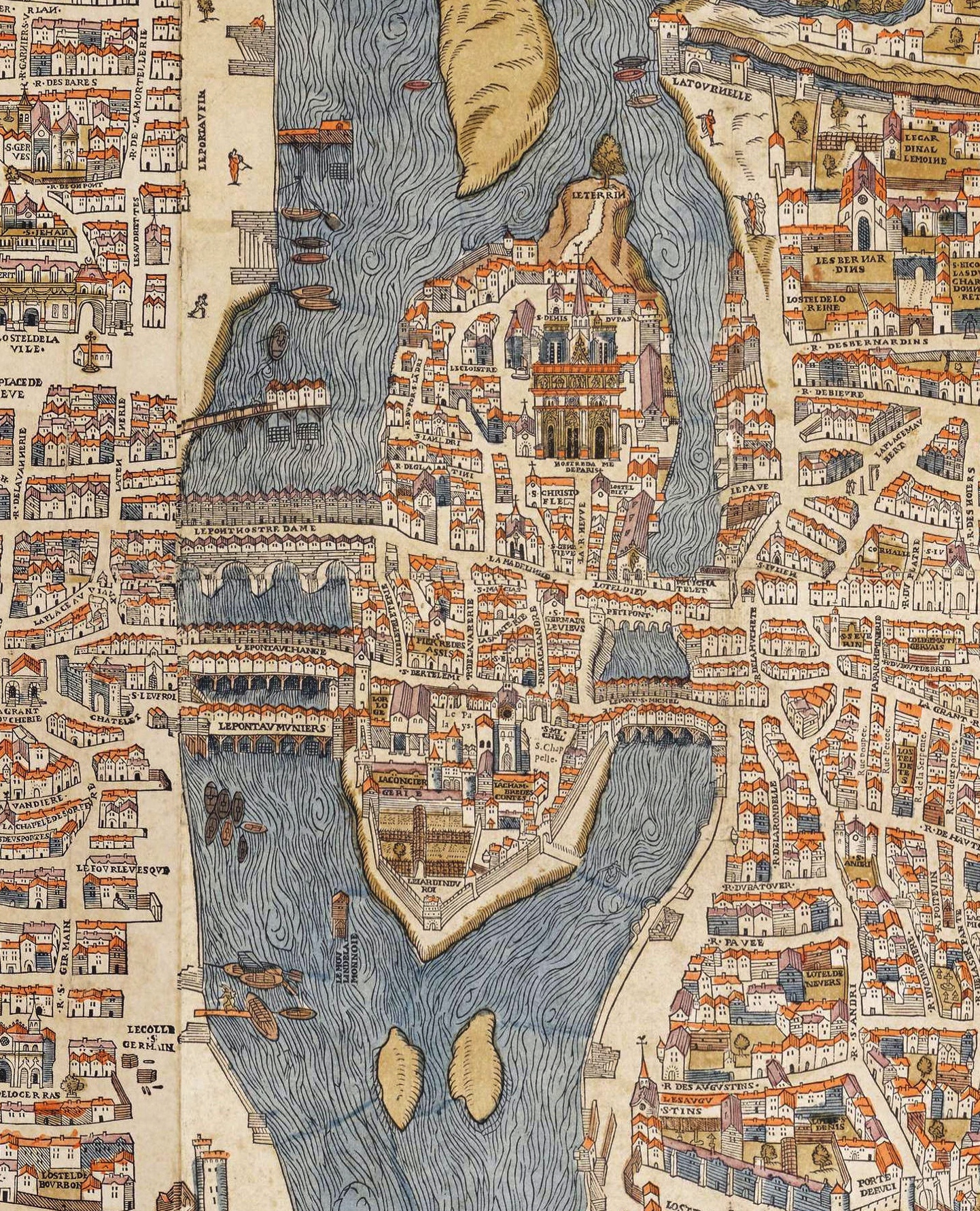 As the heart of Paris from its very beginning, the Île de la Cité is a great spot for digging into the history of Paris. This was where Jacques de Molay, the last grand master of the Knights Templar was burned at the stake in the 14th century. It is where, four centuries later, Marie Antoinette was imprisoned at the Conciergerie. Where the great cathedral of Notre-Dame was built and the “Kilometer Zero” of Paris. With time, however, the French kings moved to the Louvre Palace on the right bank of the Seine and the Île de la Cité became both the judicial and commercial center of Paris. 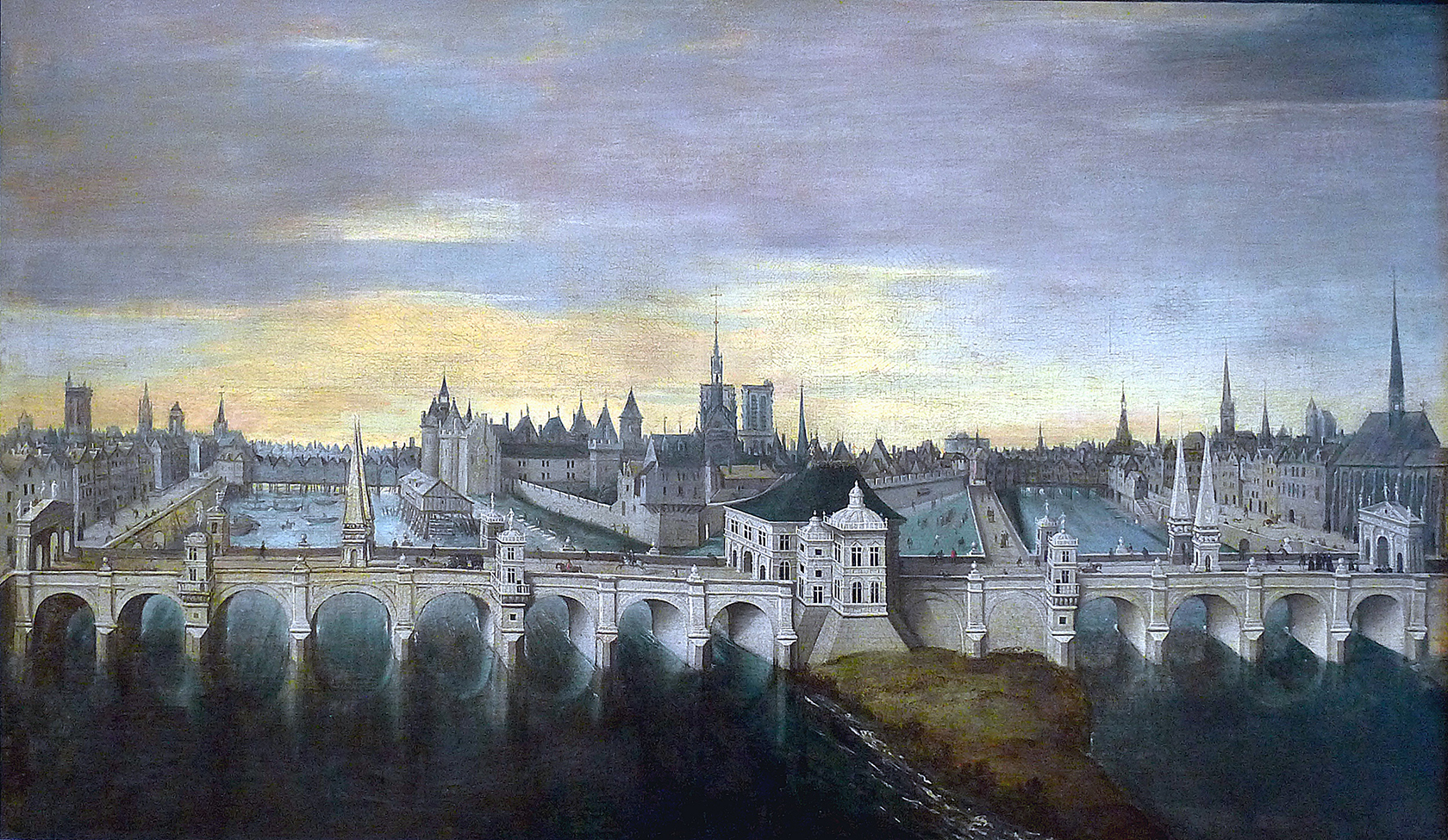 The history of the Place Dauphine we know and love today begins with the construction of Pont Neuf. Starting in 1550, King Henri II began plans to build a bridge across the Seine to relieve the existing bridges that were already crowded with traffic. However, construction of the bridge didn’t begin until the reign of King Henri III who approved designs in 1578. Early plans already indicate a complete redesign of the tip of the island, including filling in the land between the King’s Garden and the bridge, which was built over two small islets located off the western tip of the Île de la Cité.

While Pont Neuf was opened to traffic in 1604, it wasn’t completed and inaugurated until 1607. During construction of the bridge, quais were built to extend the island and it was in this new space that France’s next king, Henri IV, would create something truly unique: Place Dauphine. 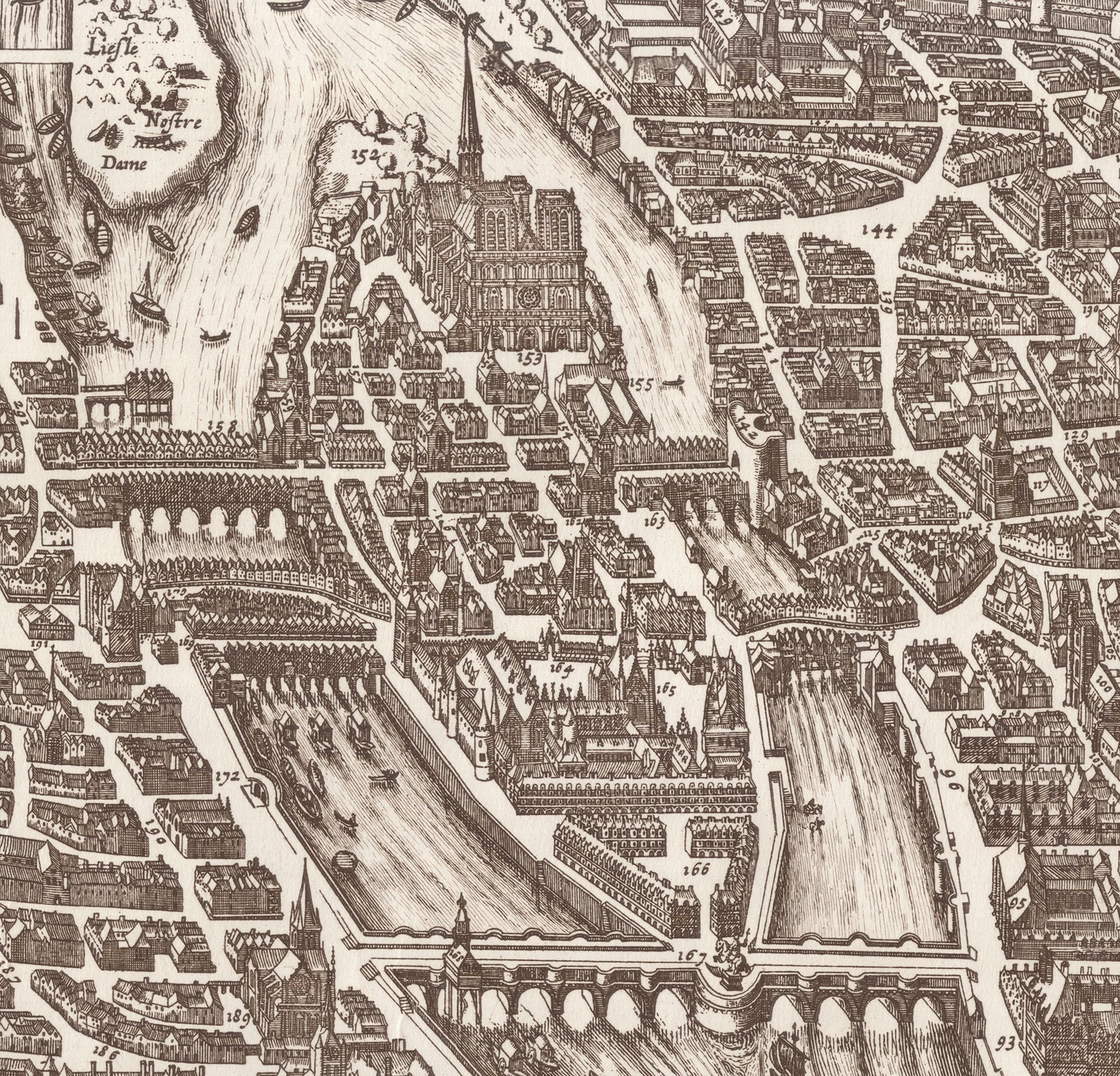 1607: The Idea of Place Dauphine is Born

As the Pont Neuf reached completion, it was time to create King Henri IV’s new square, which was named in honor of his son, the dauphin, the future Louis XIII. The location couldn’t have been better – located as it was right at the busy center of Paris at the turn of 17th century. That suited Henri IV’s plan to build commercial square perfectly.

Place Dauphine wasn’t the king’s first attempt at building a commercial square, but it would prove to be the most successful. In 1605, Henri IV had Place Royale—now the much-loved Place des Vosges—built with the intention to create a commercial and residential area for merchants and artisans. Things didn’t go quite as planned, however, as the development quickly became a square for the nobility.

With Place Dauphine, the location and scale were far more suited for the king’s desire to create an elegant and central business square. In May 1607, Henri IV approved designs for the Place Dauphine, which included rows of buildings all with matching facades that were to be built around a triangular shaped square. Each three story tall building consisted of two ground floor shops, two floors of residential space and a small attic space. 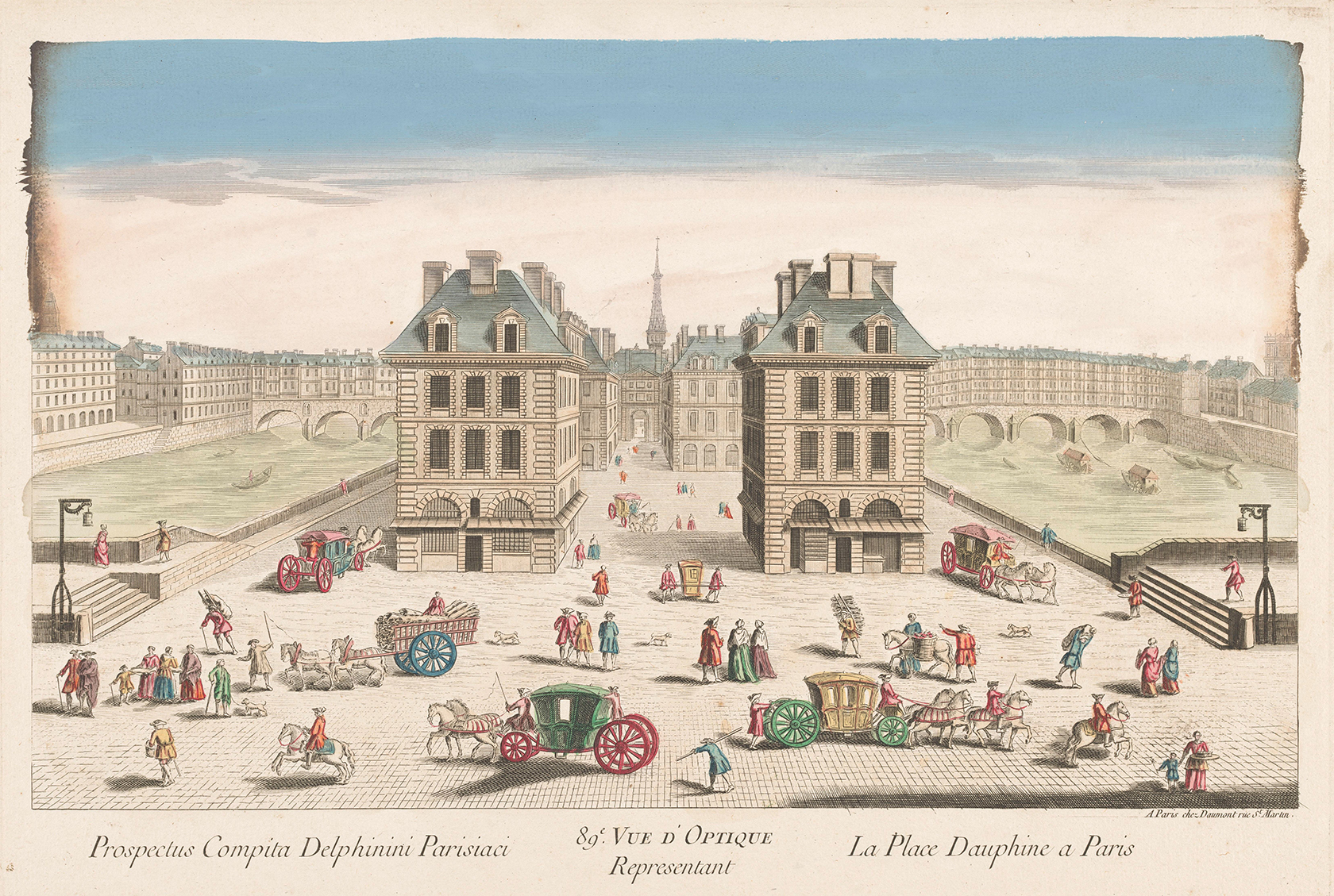 These new properties lining the square quickly became the most expensive in Paris. Each site was sold individually and the buildings, once complete, were primarily occupied by just the sort of tradesmen that King Henri IV imagined. It became a thriving commercial center that was home to a variety of merchants, artisans, goldsmiths, metalworkers and booksellers. The new square became the center for advances in science and technology as well as a sought after residential address for court officers who found it handy to live near the law courts. 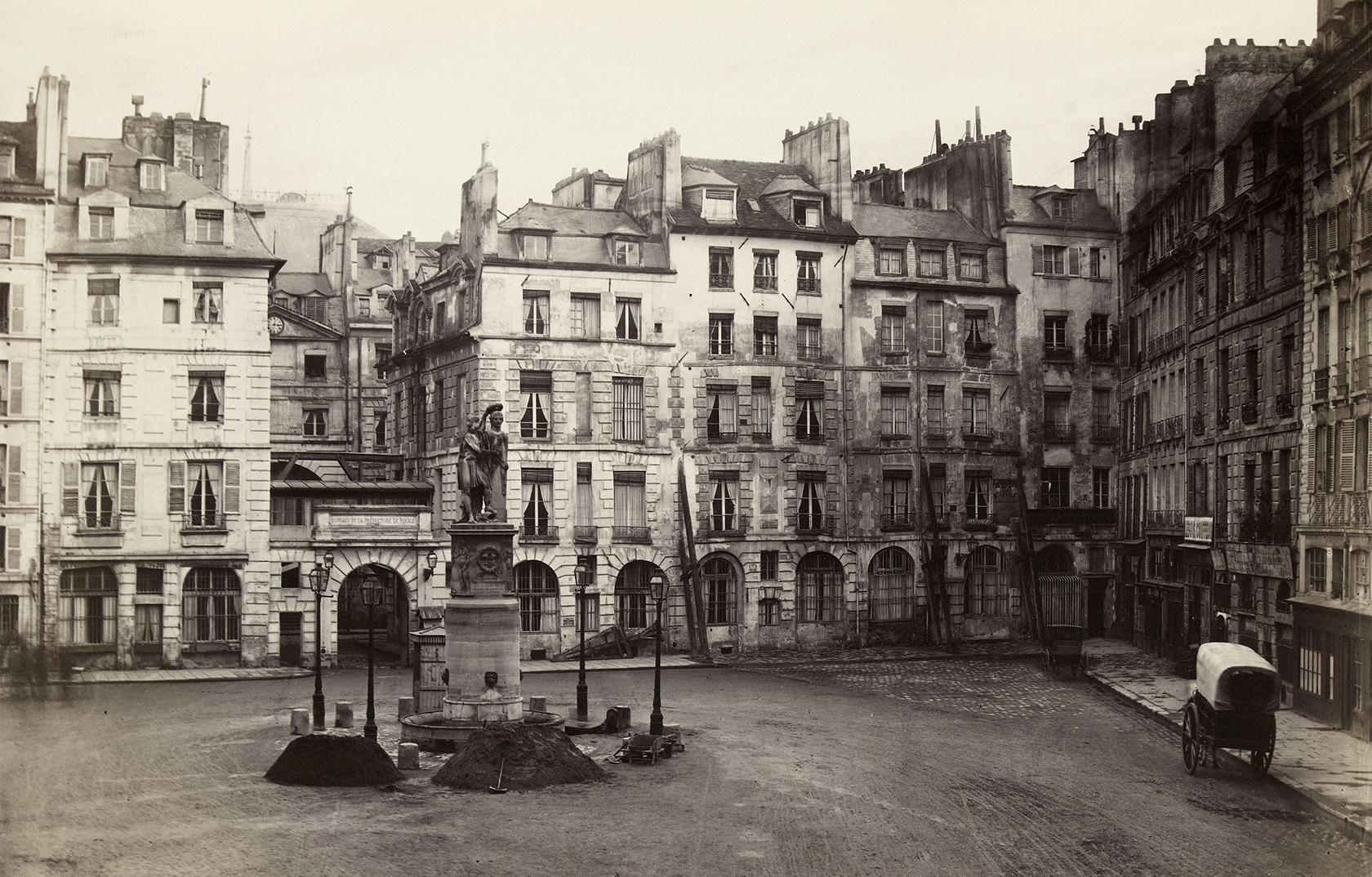 Place Dauphine before the eastern side was demolished (credit)

In the spring of 1871, Paris became the setting for a violent battle as soldiers from the National Guard seized the city and founded the Paris Commune. While only lasting a little over two months, from March 18 – May 28 1871, it left many lasting marks on the urban landscape of the city. In the last bloody days, soldiers from the Commune set fire to key government and religious buildings. The Tuileries Palace, the royal residence of France’s monarchs from Henri IV to Napoleon III, was burned, as well as the Hôtel de Ville, the Church of Saint-Eustache, and much of the Palais de Justice, located where the Palais de la Cité was at on the Île de la Cité, was destroyed. Fortunately, nearby Sainte-Chapelle survived. However, the eastern side of Place Dauphine wasn’t so lucky. The buildings on that side were heavily damaged by fires.

Although hard to imagine with Place Dauphine’s charm today, the square was worn down by the late 19th century – caught as it was in the middle of the Paris Commune fires and clashing in style to the new Palais de Justice that was inaugurated in 1868, just a few years before the fires, by Baron Haussmann (1809-1891), a French official who was the prefect of Seine. The future of Place Dauphine lay in the hands of Haussmann, the man behind the Renovation of Paris. The was the man who changed the urban landscape of Paris more than anyone since Henri IV two centuries before. That future did not look good. 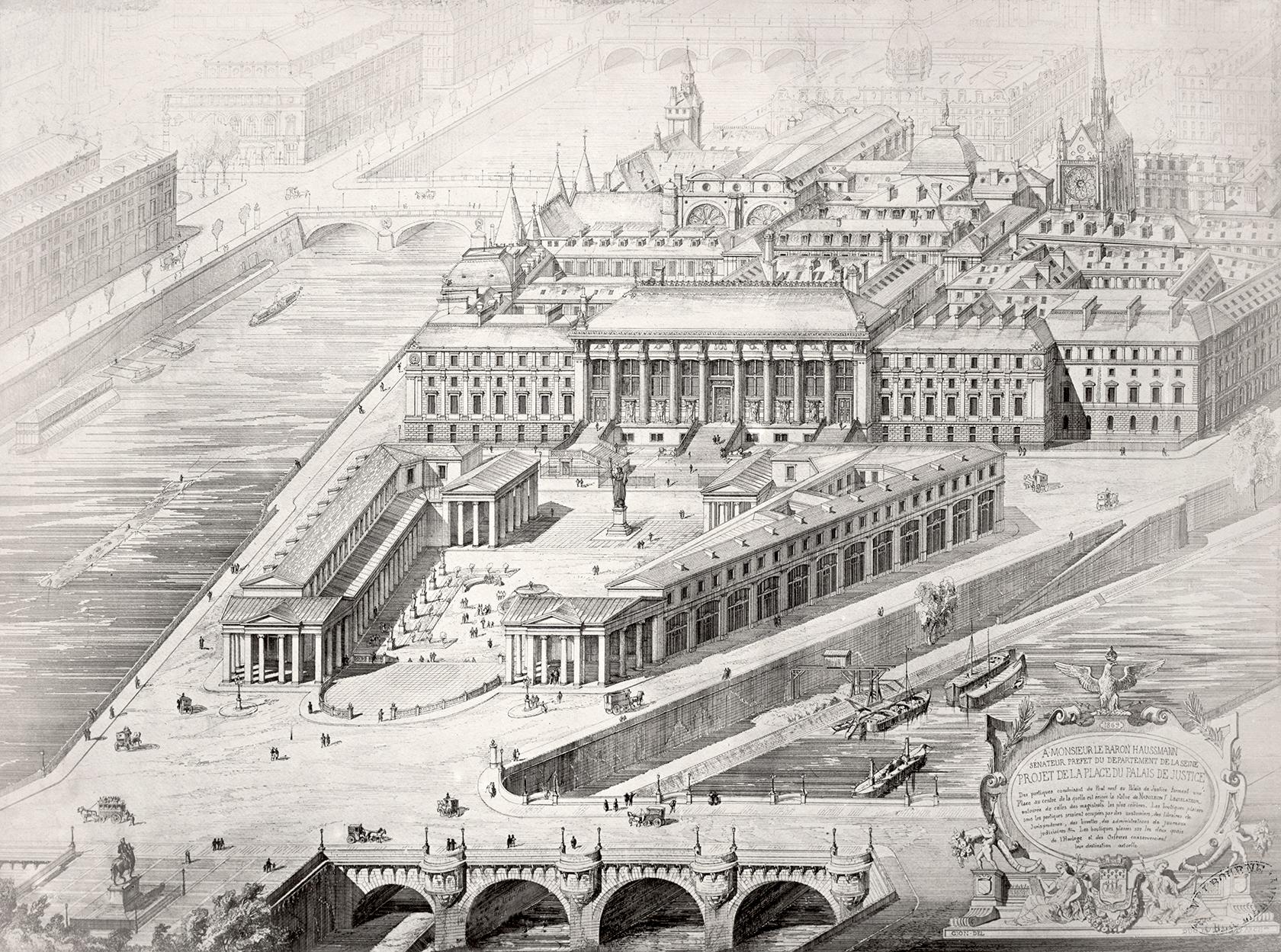 In an unexpected twist of fate, the Paris Commune and the end of the Second Empire may have very well saved Place Dauphine from the hands of Haussmann. His plans for the Île de la Cité, some of which were executed, included drastic demolition of much of the island except for the Palais de Justice, Notre-Dame and Sainte-Chapelle. Can you even imagine? We don’t have to  work very hard to imagine since we can take a look at plans that architects had in mind for Place Dauphine, which were created specifically for Haussmann. 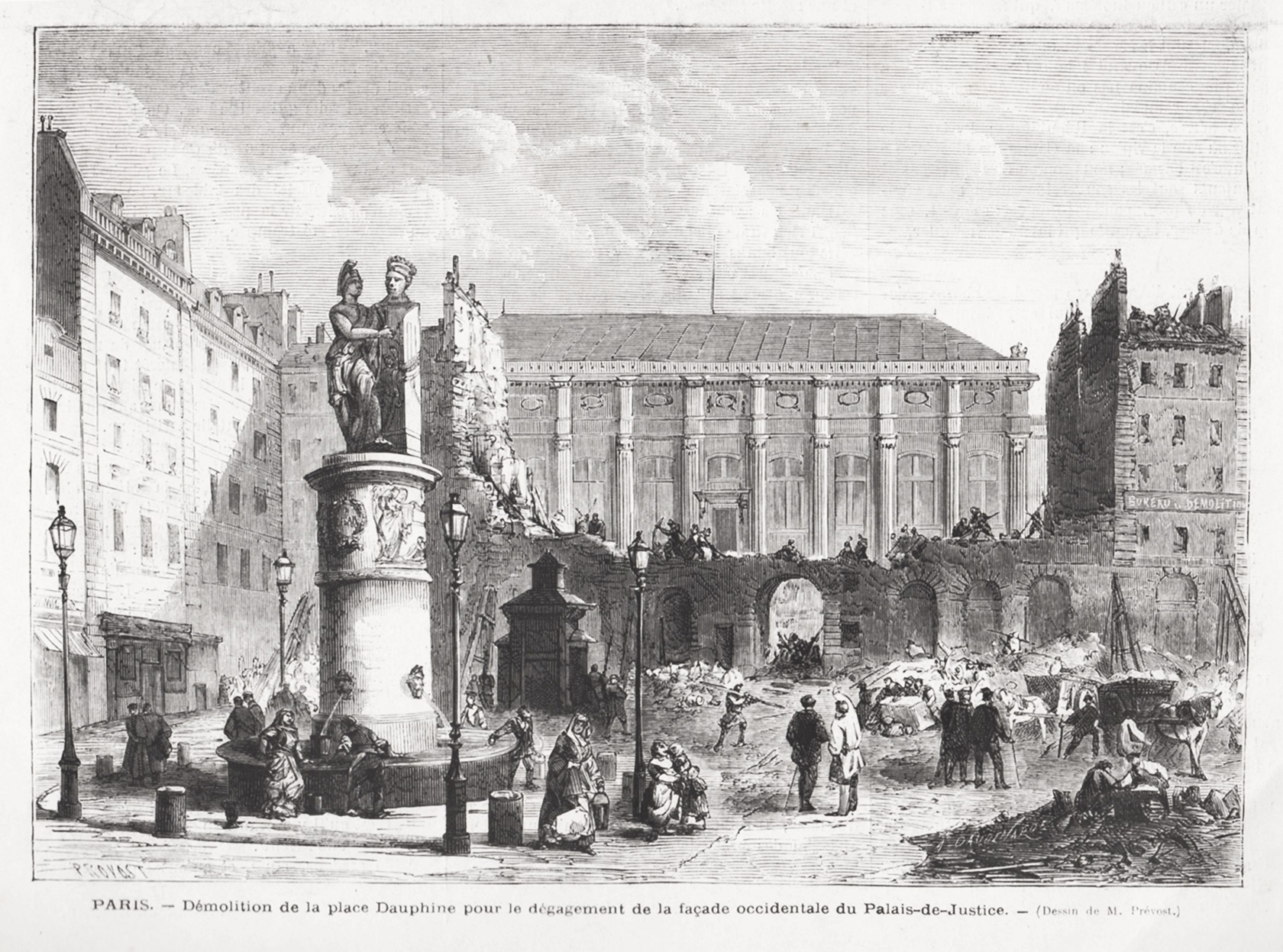 After so much destruction, the restyling of Place Dauphine took a back seat to more urgent projects – and then were simply forgotten with time. While Haussmann’s plans (thankfully!) weren’t executed, the square did need some attention. This came in 1874 when the buildings on the eastern side of Place Dauphine along rue de Harlay were torn down to open up the view and make space for the grand staircase of the Palais de Justice. This is the view we see today, complete with a garden of trees that simulates the space where the buildings once stood.

And so, 267 years after construction began on this unique square, Place Dauphine was no longer a nearly enclosed space. Yet much of the character of its 17th-century buildings survived and the history of the square—from tranquil garden to thriving business center, great turmoil and renewal—is still there waiting for you to discover. Find a shady spot on a bench below the chestnut trees and soak it all in. 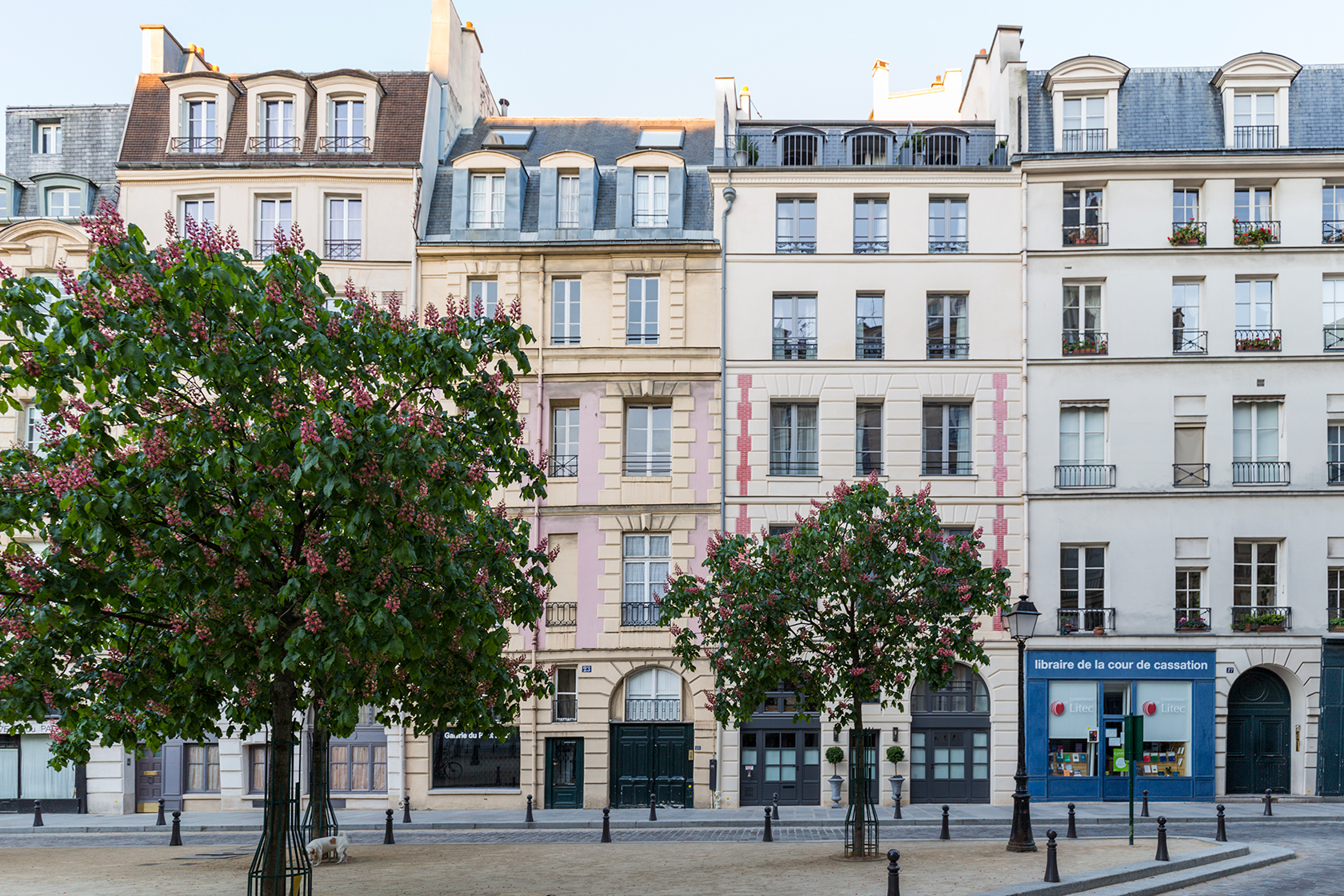 La Place Dauphine is ready to welcome you to a comfortable stay surrounded by history!

Plus … The Opening of La Place Dauphine

For Paris Perfect, there’s a very special date in Place Dauphine: 2016. That is when La Place Dauphine opened to the first guests after a 2 year in-depth restoration, which you can find out more about in our Paris Perfect video series. We had the honor of rescuing one of Place Dauphine’s historic residences and transforming it into six beautiful apartment rentals right in the historic heart of Paris. 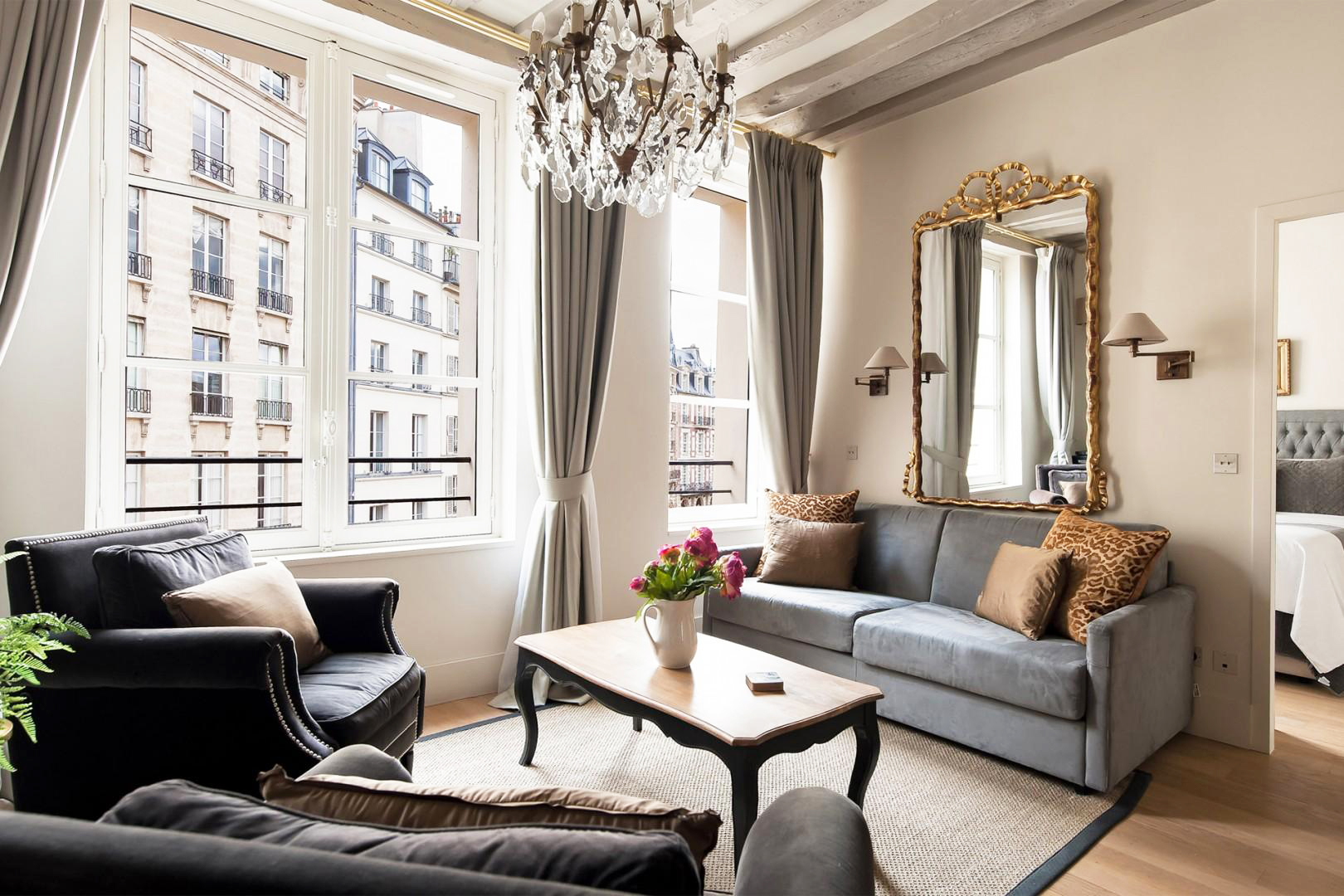 Each apartment at La Place Dauphine is full of historic details

From the moment you step into the completely restored lobby, you can feel the history come alive. Each one of the apartments is unique and full of historic details combined with all the modern conveniences for a comfortable stay. Don’t worry about climbing flights of stairs as an elevator was even added during our restoration. But look for historic wooden beams and antique decor that hearkens back to the building’s rich history. 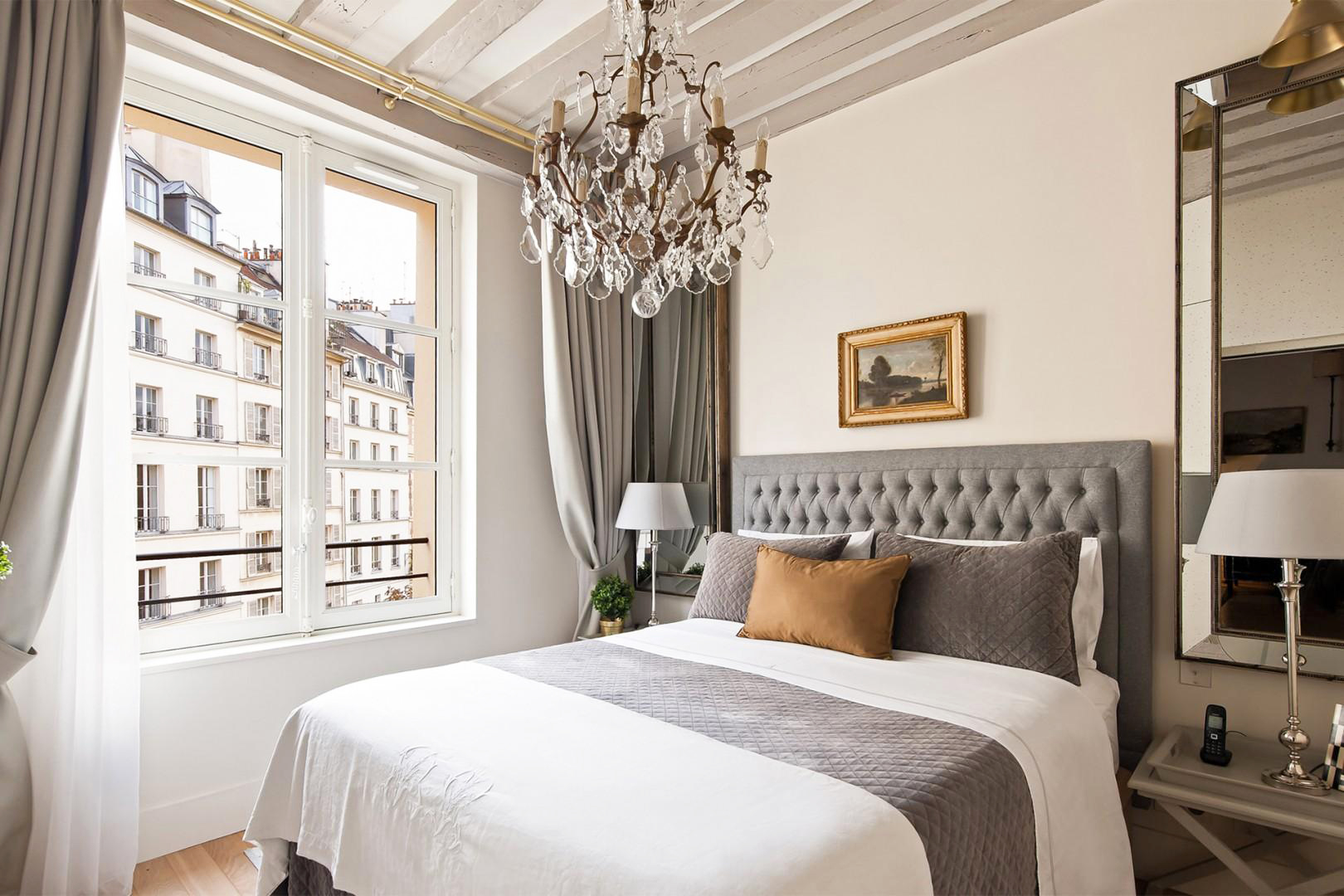 Open the windows to the Parisian morning in Place Dauphine below!

Our guests rave about the views and how the atmosphere of Place Dauphine can be felt in every apartment rental. Whether you’re waking up and opening the windows to hear the sounds of morning, watching a game of pétanque or enjoying sunset, you’ll experience Place Dauphine in a new way. You can even relax and take in the views from the balcony of the two penthouse properties Savennières and Monbazillac. 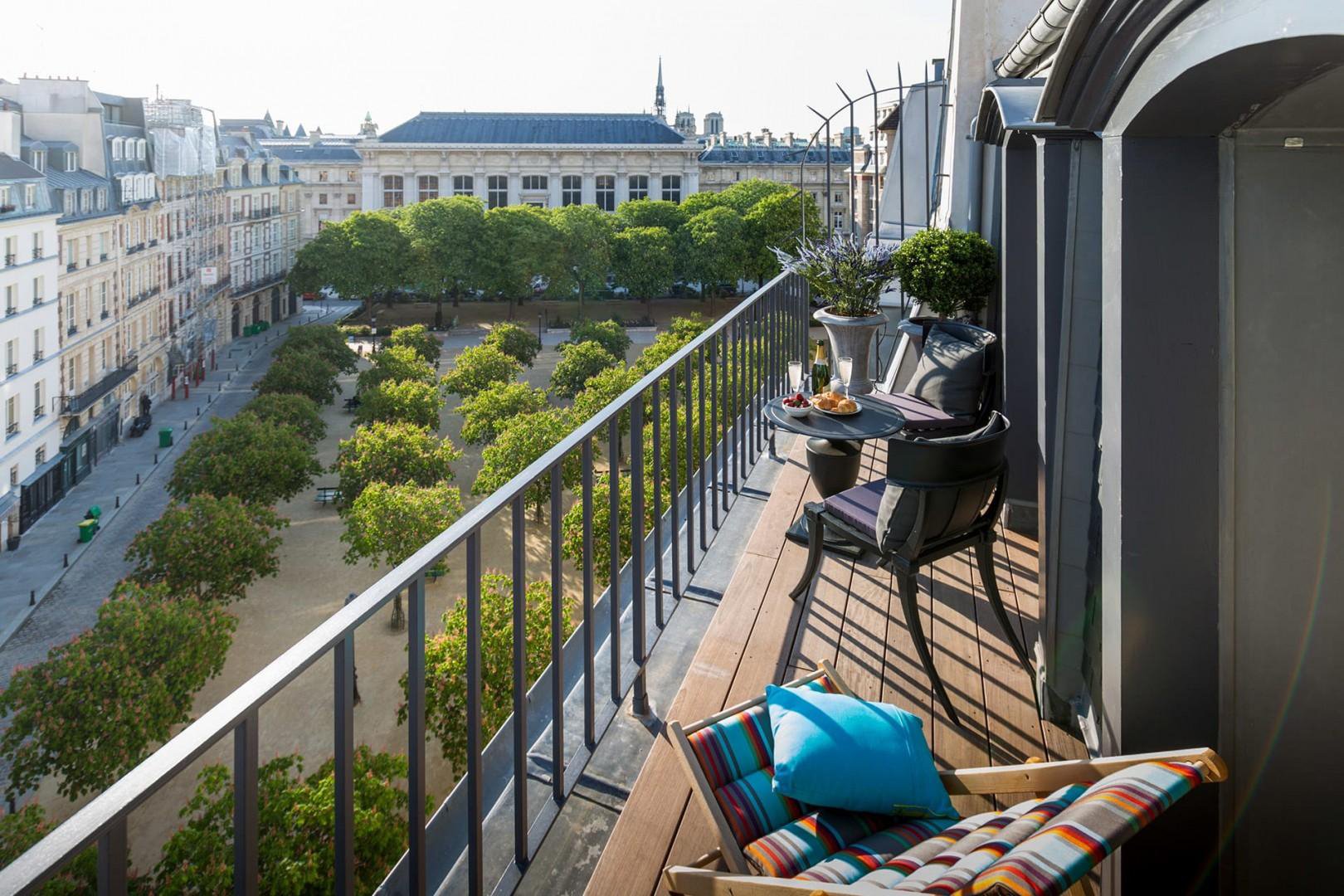 A stunning view from the Savennières penthouse at La Place Dauphine

Ready to book your stay at La Place Dauphine? Contact our reservations team for help planning your perfect stay in the historic heart of Paris!


Posted
on Friday, November 12th, 2021 at 11:19 am in Parisian Living.
You can follow any responses to this entry through the RSS 2.0 feed.
You can skip to the end and leave a response. Pinging is currently not allowed.

Find Yummy Crêpes Near Your Short Term Rental in Paris

One thought on "5 Key Moments in History for Place Dauphine"