AN INTERVIEW WITH CLAIRE LAFFUT 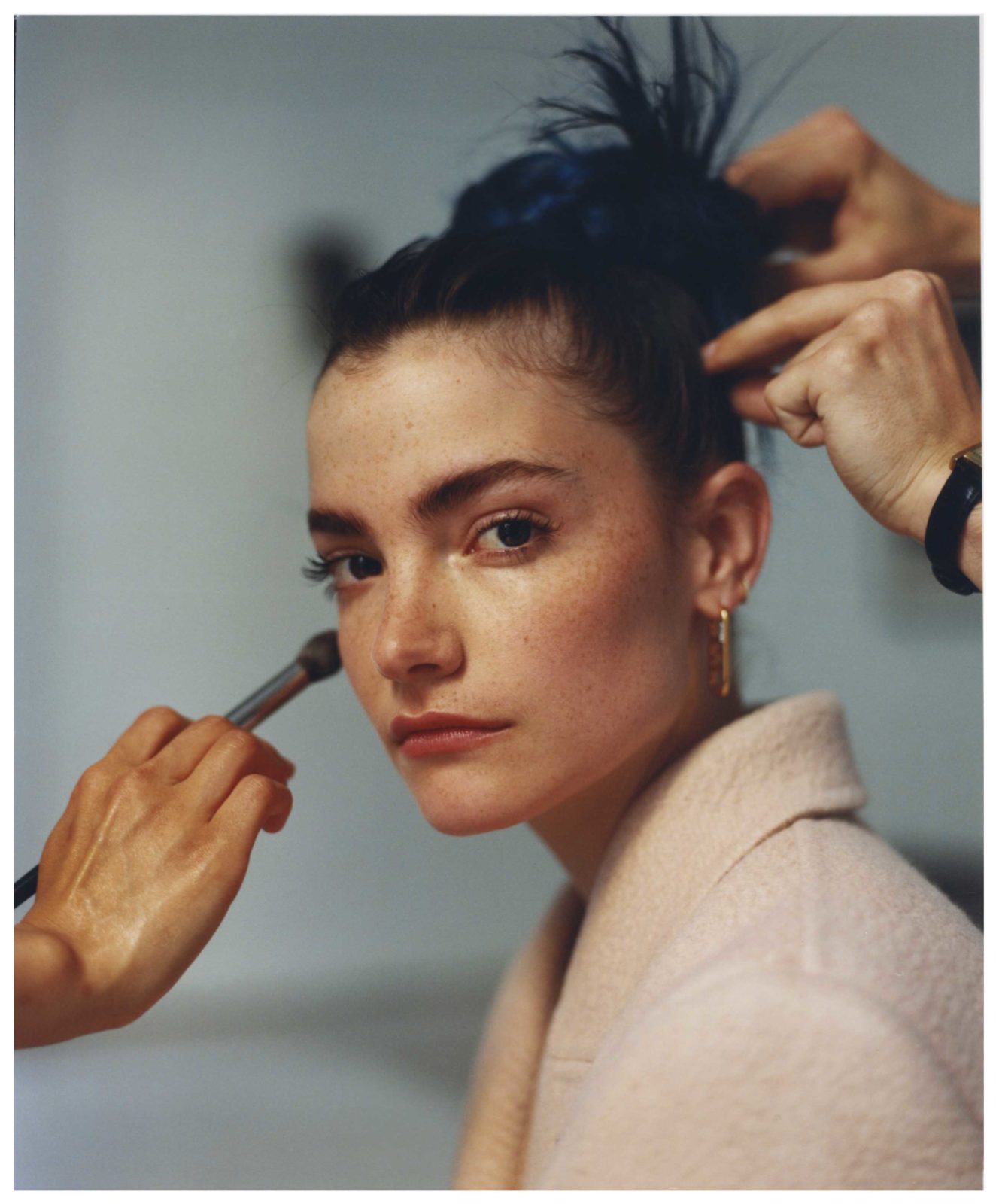 After her first few years in music marked by noteworthy tracks like Vérité, Mojo and Gare du Nord, Claire Laffut is about to take a major step in her career by releasing her first album, under the modest title of « Bleu ». In this interview, she opens up about her origins, her relationship to life and art, as well as her first years of experience in the music industry. Photographed in Paris by Bettina Pittaluga, she wears Fendi’s Fall/Winter 2021 collection, the luxury brand’s first women’s ready-to-wear line designed by Kim Jones. 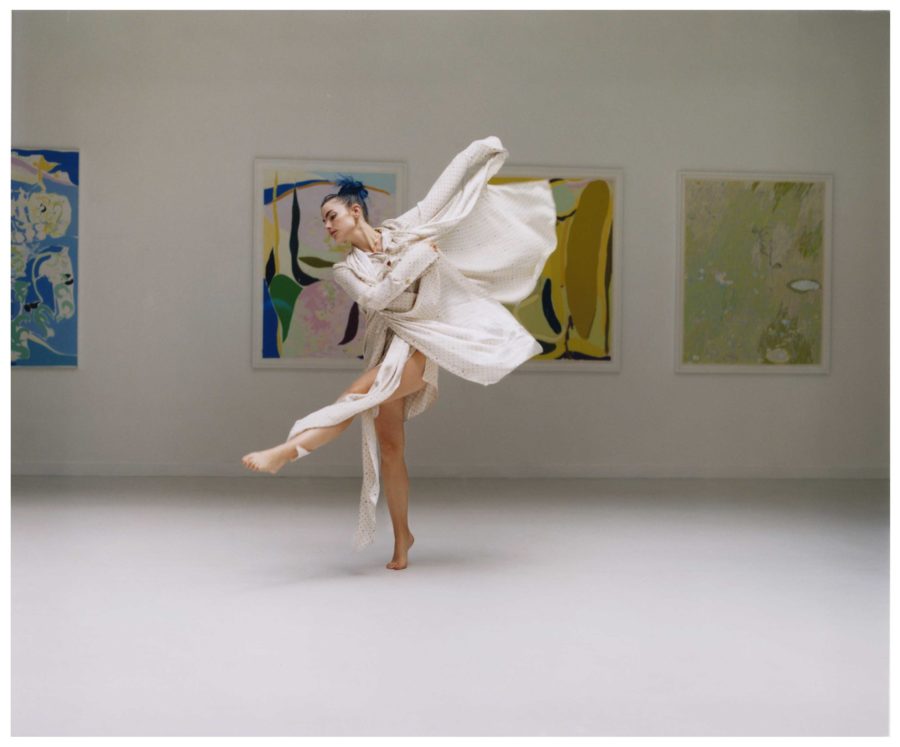 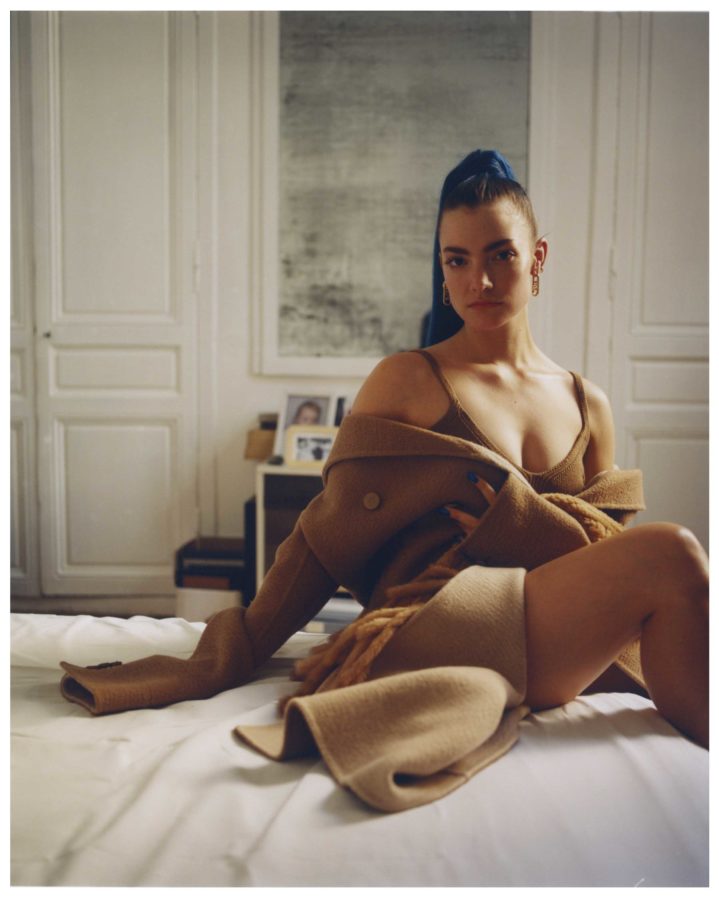 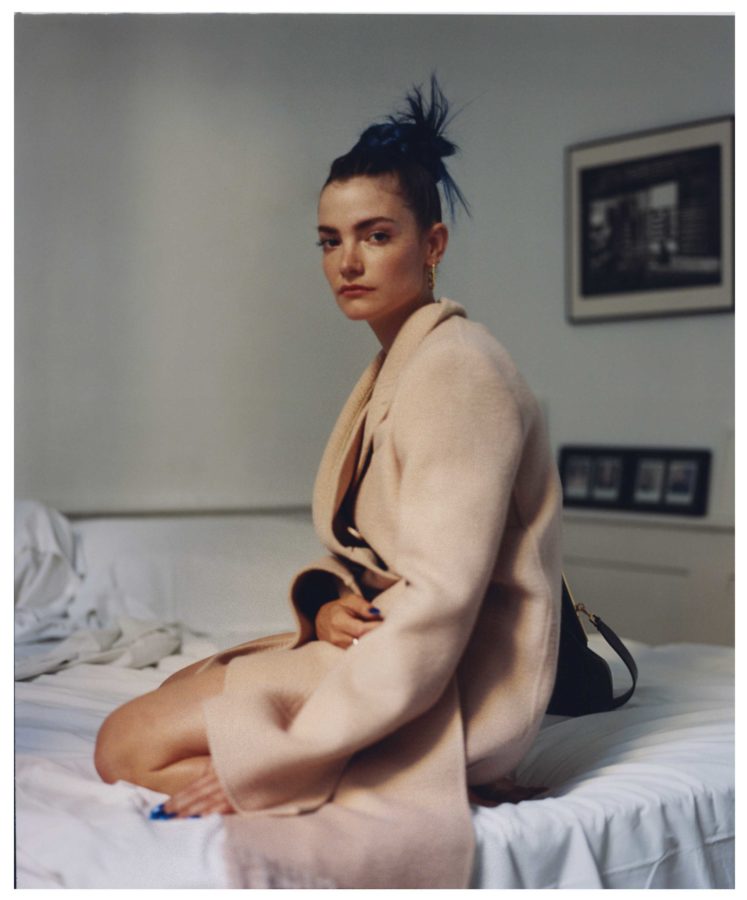 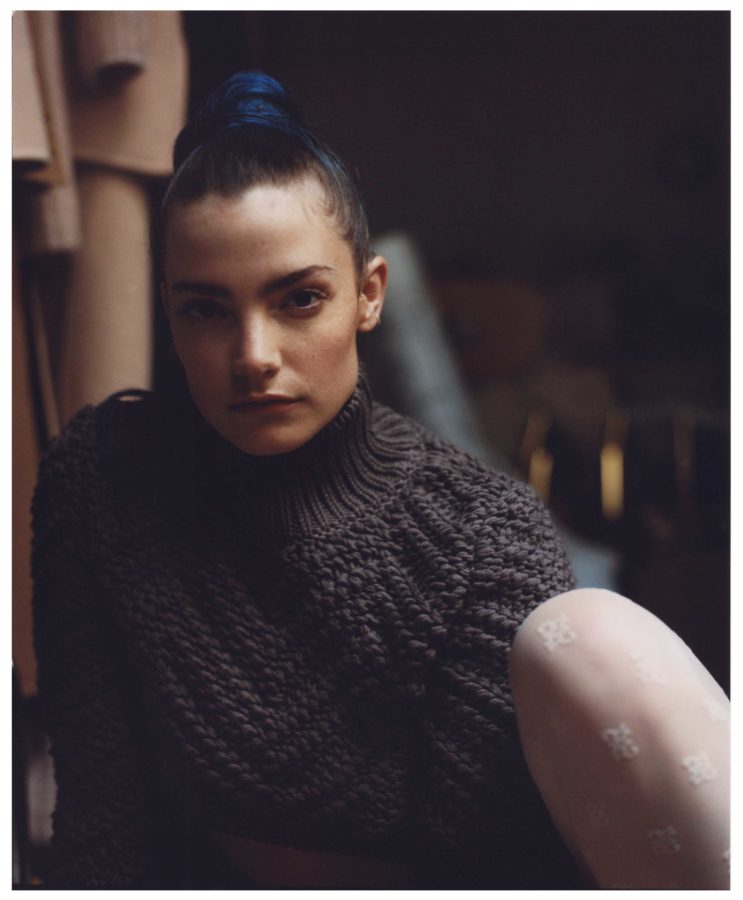 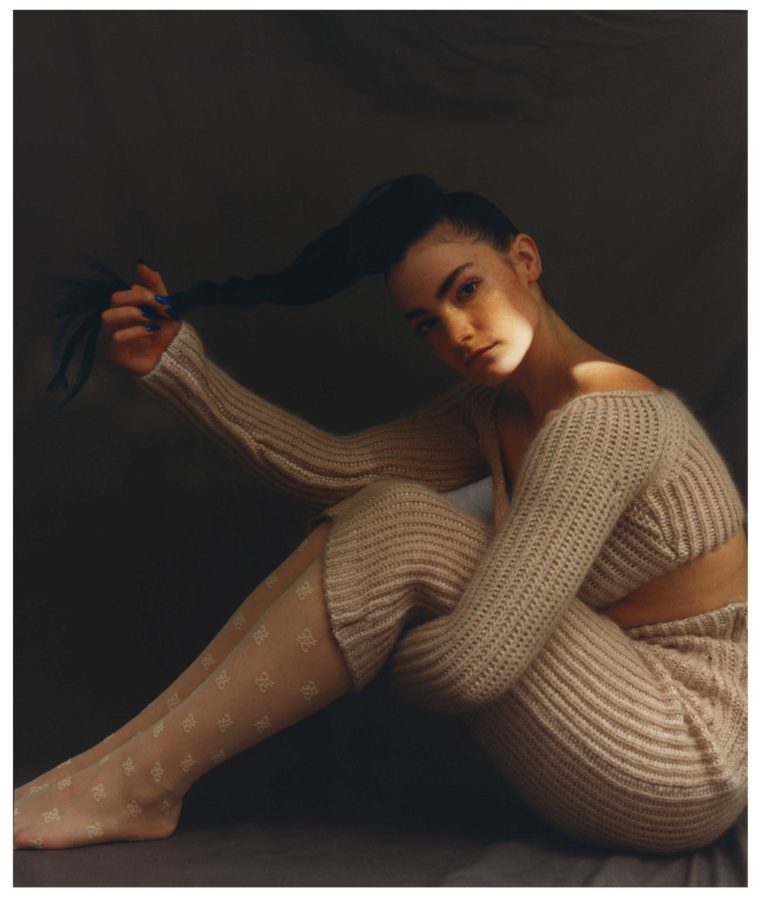 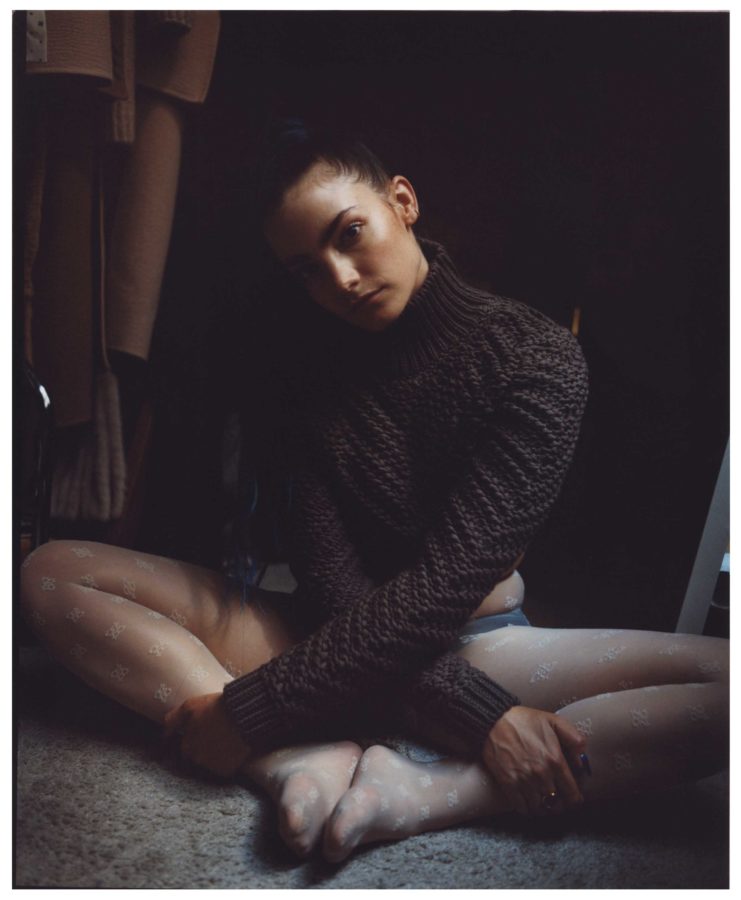 Our current issue is about ecology. Have the events of the last few years made you more aware of these issues? Have you changed any of your habits?

Very much so. I’m in love with our planet, it’s a miracle. I haven’t set foot in a fast fashion store for three years now. I try to reduce my waste as much as possible. I even write songs about it!

As a woman in music, things seem harder for you: you have to work twice as hard, make fewer mistakes, take more criticism, etc. Have you had any bad experiences in music so far?

I used to feel a strange type of competition that men created between me and other female artists, especially in terms of not being listened to or not being taken seriously. Once I signed with my label, those attitudes changed. They also laughed at me when I said I wanted to combine my painting with my music… They tried to tell me that I had to look like the girl next door. A label manager also once broke into my dressing room ten minutes before a show to tell me I was too pretty and that none of the girls would like me. That kind of crap…

Anthony Thuong-Seng: Claire, let’s talk about your background and origins…

Claire Laffut: I’m just a girl from Namur in the Belgian countryside, or rather the industrial area. I lived next to factories, train tracks, construction sites, etc… I wanted to leave from a very young age. I was drawn to the capital and all the adventure. My mother pushed me to enroll in the local academy, but I didn’t really know what I wanted to do. So I tried everything: classical dance, piano, drawing… It was my second home.

Did that experience awaken anything in you?

Yes, definitely! When I was fifteen or sixteen I was able to join a dance school, which was my first real connection with music. Unfortunately, I injured my ankle. I gave up my dream of being a dancer and took up drawing more seriously than when I was little. It was a happy accident after all. (smiles) Later on, I enrolled in university but I wasn’t taking enough classes, since I was going out to clubs too much. At nineteen, I decided to go to Paris after a breakup. I was amazed by everything I saw there: the architecture, the metro, the people. I came by bus (laughs) and stayed with a friend. I felt independent. I was the only one in my family to go. I went out a lot and did a little modeling, but I didn’t like it very much. I did it because I knew it gave me some financial security. What bothered me was being scrutinized by agencies, being asked to lose weight, etc.

So shooting for Crash today must feel like a sort of revenge? We chose you for who you really are.

Yes, totally! My past experience helped me financially and taught me a lot about posing and managing my image. I was able to meet a lot of photographers and it still helps me today. At the same time, I started training at a theater school in Paris and that was my springboard to music. I met a talent scout who worked for Vivendi and was looking for new talent for a show. The day before my appointment, I got in a fight with a girl at a club because she was hitting on my boyfriend. (laughs) So I showed up at the meeting with a black eye that I tried to hide behind sunglasses. Then came the moment when she asked me to take off my glasses. I had to explain it to her and she just laughed.

When did you first record music?

It wasn’t planned at all. I improvised and it was a magical moment. I became obsessed with the music. A woman I had met just before sent my demo to Universal. They offered me an initial contract but I didn’t really understand it.

Going back to music, there are a lot of influences in your songs and you put your voice over all sorts of rhythms. What are you listening to right now? What are your « classics »?

My classics? Avril Lavigne. (laughs) Right now I’m listening to a lot of rap like Burna Boy, Jorja Smith, Kali Uchis. I devour music. I always try to find nuggets on the internet. I also like to listen to really old music like Mort Garson. I love Yseult so much, she’s like my sister. We discover new artists together. My father was crazy about vinyl when I was growing up. He always went to flea markets and brought back a bunch of records. We would listen to everything from Claude François to Berlin techno. He introduced me to a lot of different music like Fela Kuti, and I even recorded with his drummer Tony Allen but it was never released.

Do you still feel affected by the events you talk about in your music, especially your disappointments in love?

The album is going to be called Bleu, and in Belgium we have an expression that says « je suis bleu de toi », or I’m blue for you, meaning I’m in love with you. It applies to a lot of my first loves. I’m very passionate in love, and I can’t live without being in love. I’ve lived through a lot of sad stories, but now I can turn them into music with hindsight. It was hard at the time because I was very emotional. On Hiroshima, I talk about a relationship that was especially hard for me. I was with a really manipulative boy and it was exhausting to sing about the intense memories of that relationship.

Is expressing yourself in music way for you to grieve and move on?

Yes. When making music I feel like the little kid dropping white pebbles to remember their way home. I want to listen to my songs again when I’m fifty and say, « What a journey!« . It’s therapeutic for me. I like to write unconsciously, without really planning what I’m going to say, which is only getting easier for me. Songs can reveal things that we don’t even know are in us. They make us remember our moods and feelings. Making music is therapeutic.

You also paint. Do you think your music and painting are intertwined?

Yes. The thing I like about painting is that it helps me push my music even further. I can create a whole dreamlike universe around my music. It adds a lot of poetry I think. I don’t think of myself as just a singer. I just want to be free, produce an album, then do a collection of furniture and paintings, for example. I don’t see myself as just a pop star. I like to work on different levels.

What are your influences in painting?

I really like Le Douanier Rousseau, especially his paintings of jungles. There’s one called « La Charmeuse de Serpent » that I would love to steal. (laughs) It’s mysterious and naive because he was self-taught.

Could you see yourself putting aside one of these two passions as your career progresses?

It’s already hard to do both right now, especially because I paint huge canvases. (laughs) Fortunately in Brussels I have a studio where I can draw. I don’t have enough space to paint in Paris. For me, painting and music are two different activities!

You already mentioned your new album in 2019. What has happened since then?

During lockdown I had time to paint because I was stuck in my studio. I was also finishing up some of the songs on the album. For example, the music video for Étrange Mélange is an animated painting. I finished the album in May 2021. It was a real gauntlet: I changed labels four times in the process, and it took a lot of organization and time. In hindsight, I can say that those challenges have hardened me for the future. In the end, I was lucky to be able to spend lockdown with the love of my life and my paintings, both in Corsica and in my studio. But I missed seeing people at concerts.

Tristan Salvati and Gaspard Murphy play a big production role on your tracks. Tell us about how you met them and what they offer you.

I met Tristan through Lola Le Lann when he was producing music for her. During our sessions, we had a musical love at first sight and made a lot of songs like Vérité, Mojo, Avis de tempête, Gare du Nord… That really set the tone for our sound. They were also my first French lyrics. Gaspard was my musician on tour and he also produced, so we started making songs. There’s also Pierre Juarez, who worked with M, Fatoumata Diawara and Franz Ferdinand. He brings a lot of warmth to his music.

Let’s end with a simple question. Where do you see yourself in the near or distant future and what can we expect from you?

I don’t really make plans for myself anymore because life has its own plans, so you have to take things day by day. It’s been a long road for me to start relaxing. I even tried acupuncture. We tend to put a lot of pressure on ourselves. When you’re an artist, you can become a source of inspiration for others. They can feel your vision and your creative world. So you have to look at it like you’re cultivating a little garden where you can just relax. I think that being natural like that is what helps you reach an audience. Finding peace of mind can unlock a lot of things, whether in terms of performing, singing or speaking. The audacity of youth is beautiful and it’s our greatest strength, so we have to make the most of it and just believe in ourselves.