A MEETING WITH NOOMI RAPACE 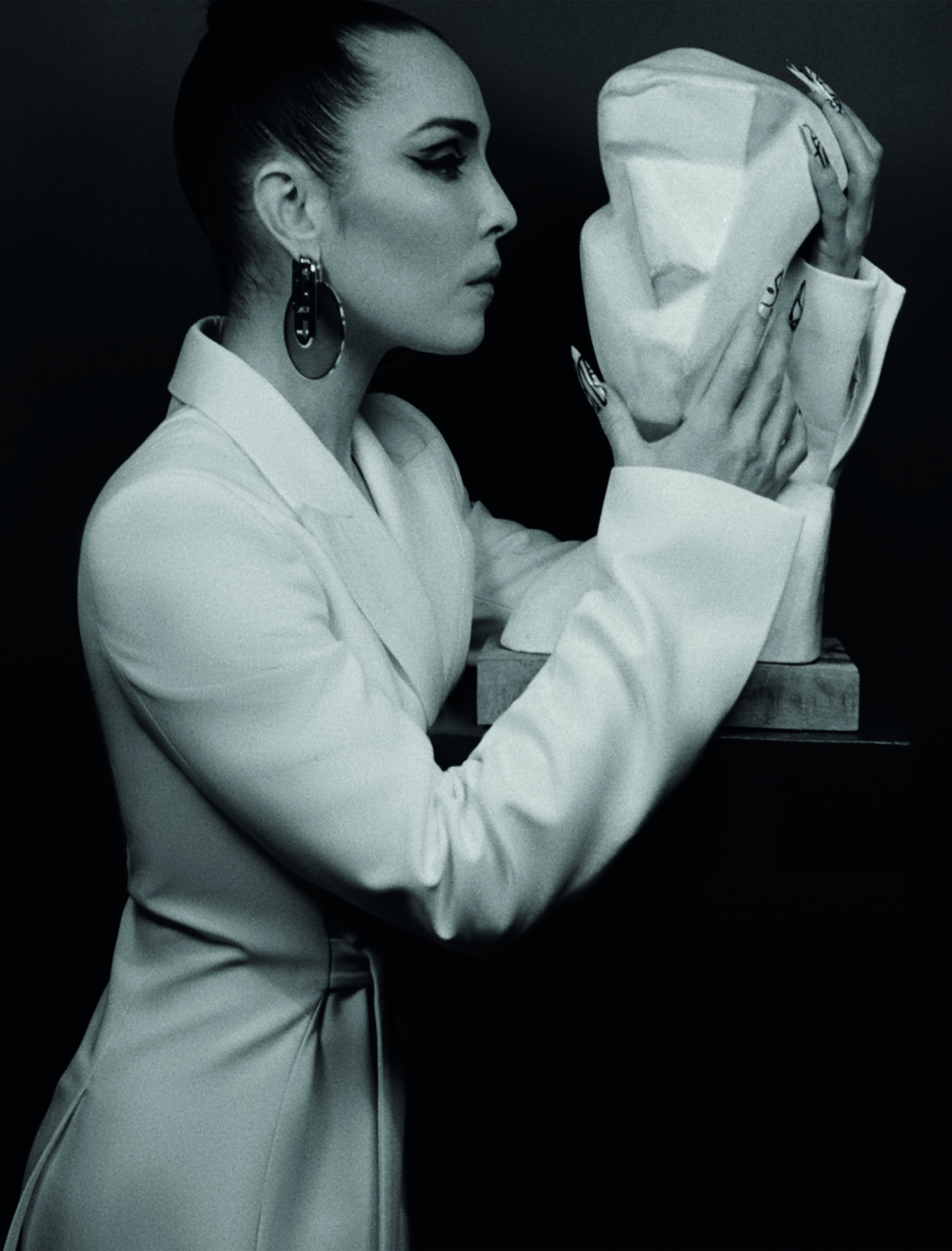 Noomi Rapace is an actress unlike the rest. Soaring to international recognition after her outstanding performance as Lisbeth Salander in Niels Arden Oplev’s 2009 adaptation of ‘Millennium’, she continues to dominate cinema with her feisty interpretations of countless iconic female leading characters, that have included Elizabeth Shaw in Ridley Scott’s ‘Prometheus’, Leena in Pernilla Augusts’ ‘Beyond’ and most recently as Caroline Edh in Adam Bergs’ ‘Black Crab’ for Netflix, set for release this March of 2022. It’s her phenomenal stamina, self-discipline and determined focus that transported her from an upbringing on a rural farm in the north of Sweden onto worldwide cinema screens, Noomi Rapace retains a warm air of approachability and humility, rare in a star of her ranking. In this intimate interview she talked with Armelle Leturcq about filming in breathtaking but brutal locations, juggling motherhood whilst retaining a hectic schedule during the COVID pandemic, being dressed by Fendi by Kim Jones for red carpets events, and the importance of dressing down our idols in order to keep the ego in check.

Photos followed by an interview with Armelle Leturcq 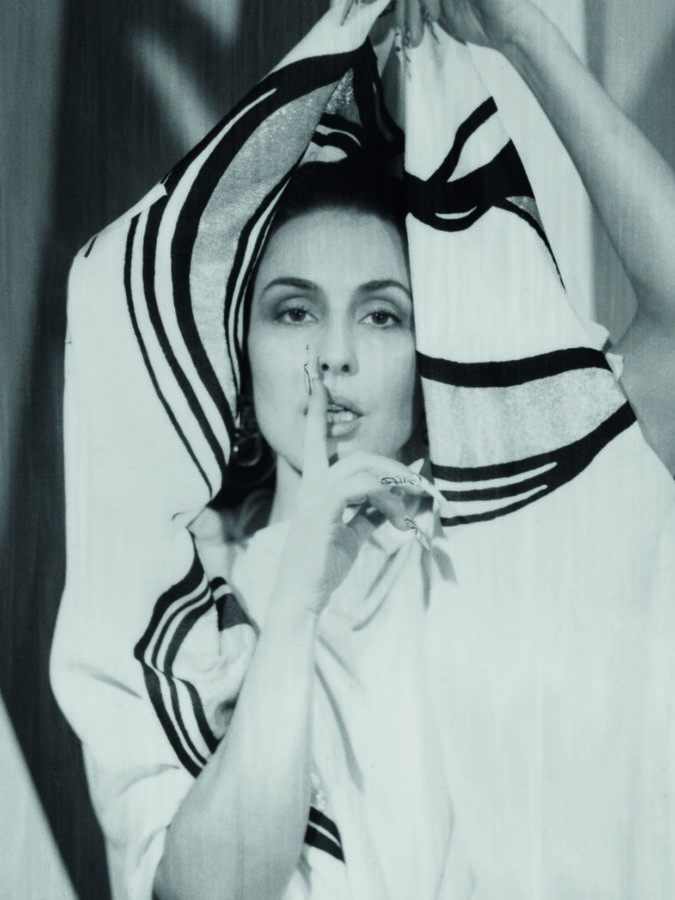 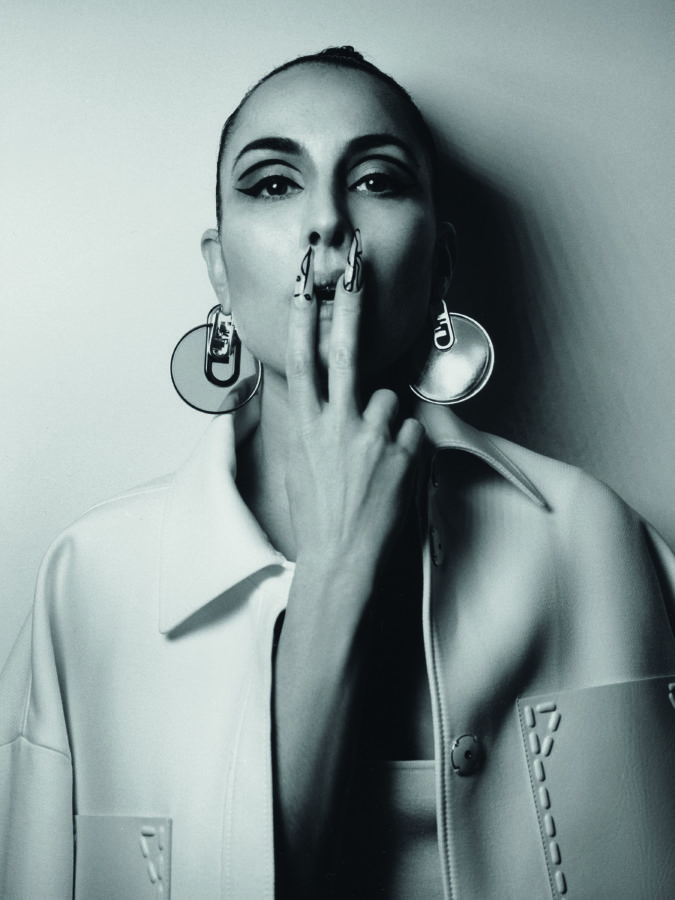 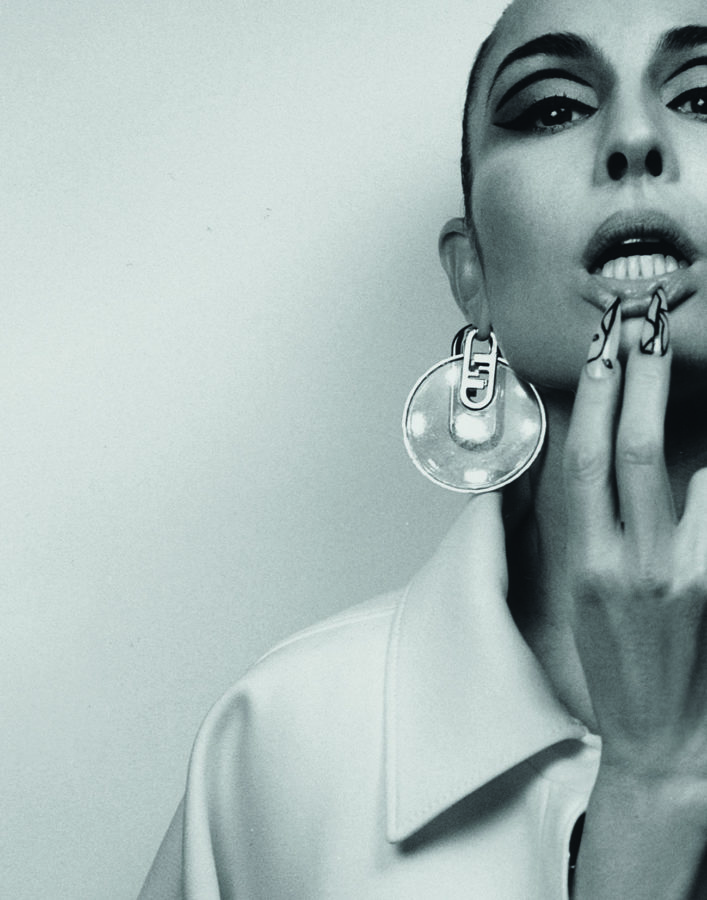 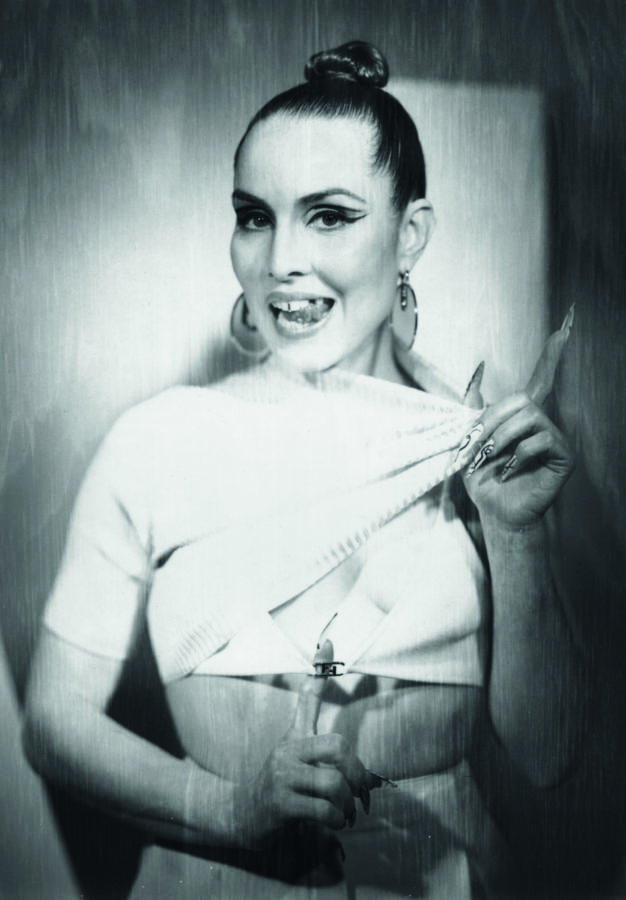 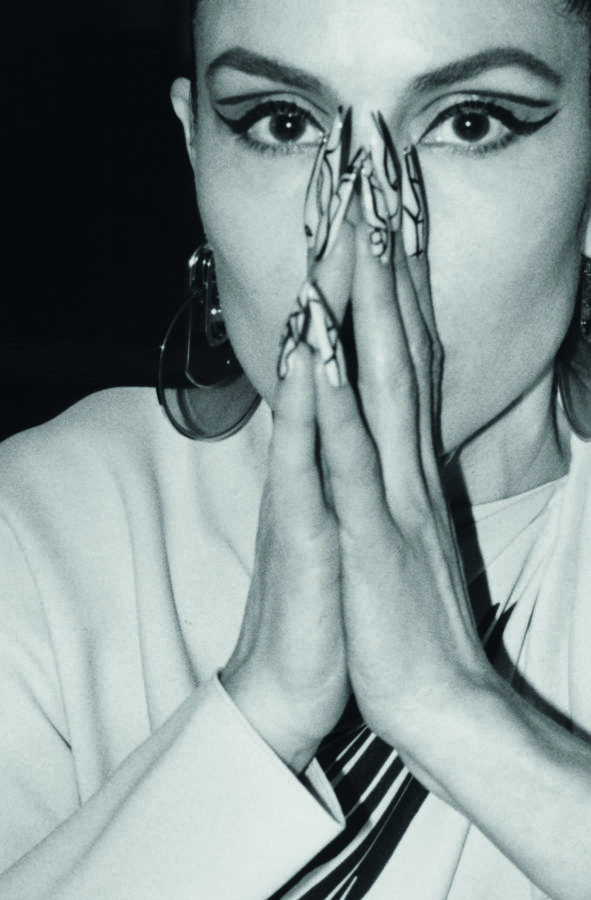 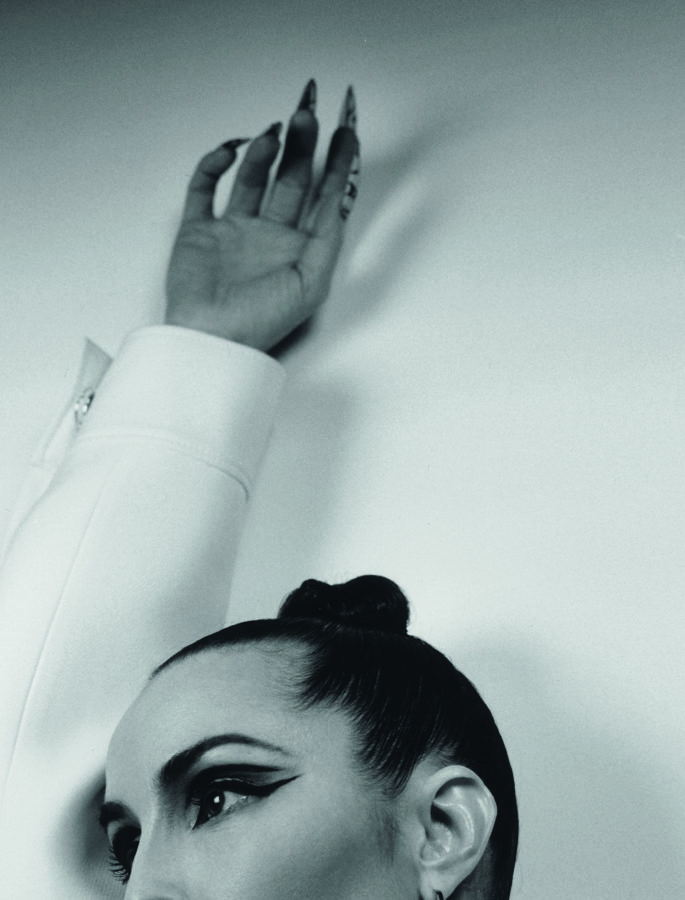 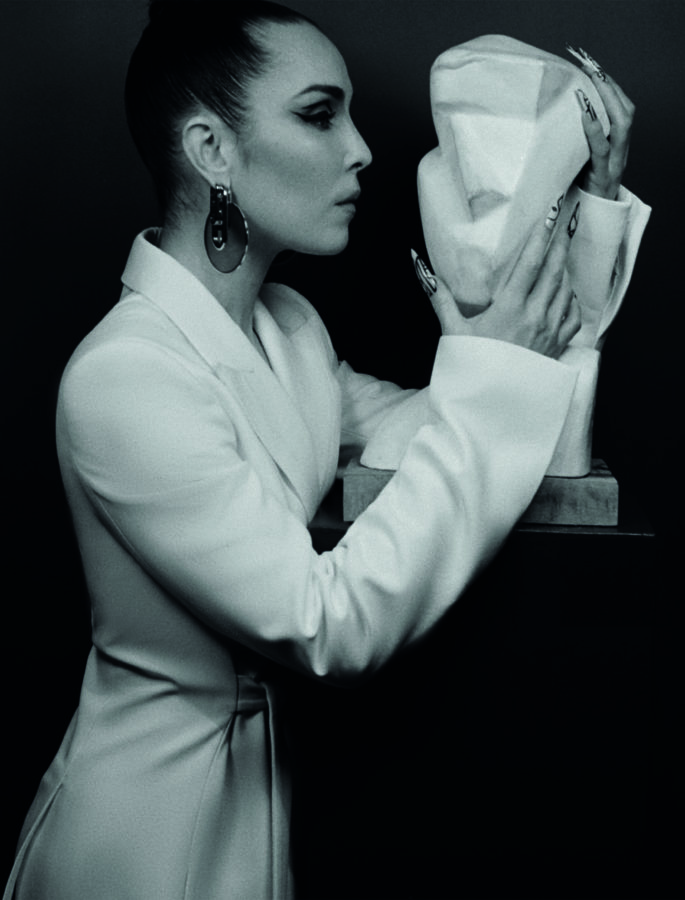 AL: You always play very strong characters, it’s amazing. It’s not as common to see female actresses getting such strong leading roles, quite often they play the secondary part and they’re not necessarily the hero of the film, but in all your roles you really are the hero of the film, it’s so impressive.

NR: It all started with Lisbeth Salander in ‘Millennium’. I had a career beforehand in Scandinavia, but it was ‘Millennium’ that introduced me to the international scene and I think that the character was so strong and she became such a significant person that it allowed me to have my own space straight away. I never felt like I was put in a position where I had to compete for roles. I almost have my own genre, which is a blessing because I hate competing! (Laughs) I’ve always worked by making connections with people first, and then finding projects that we can collaborate on afterwards. I’m very interested in people. Similarly to when we met, it was one of the best shoots that I’ve ever done and I felt like you were someone that I would like to get to know on a more personal level. Everything is always very personal for me and not corporate. I don’t audition or make self-tapes. I prefer to be very much in the eye of the storm. I’m much more interested in working with people face to face, eye to eye, hand to hand. When Ridley Scott picked me to play Elizabeth Shaw it was like he put his arms around me and blessed me. He said to me “You don’t need to prove anything, just come and be who you are, you don’t need to show me anything, you’re not on trial. Just be yourself.” When he said that to me, it really stuck with me, way beyond that specific movie. He’s such a huge icon in world cinema, and especially in Hollywood, and someone who is that strong, asking me not to change and telling me to have courage in myself, was something that I took to heart. It gave me a power and a confidence which allowed me not to feel like I had to change in order to be given certain roles.

AL: That sounds like a great encounter. Do you think that the people you are working with are more important than the project itself?

NR: Yes, I always need to have a connection, sometimes it can be with the character that I’m playing that I feel the strongest connection, but you can’t always love everyone you work with. I’m very driven by the directors I work with and I love to go on a journey and explore. I like to let go of control and allow myself to take risks and I think that you can only do that if you have a strong personal connection and if you share the same idea about what you want to achieve. All the directors I have worked with have very strong voices and perspectives so when I bring everything to the table, it’s like I become a citizen of their country, so to speak. I give myself completely to them.

AL: Do you have a strategy in terms of your career, or do you follow the path and see where it leads you? Do you have agents that advise you in which roles you should take?

NR: I follow my heart, my intuition and my gut feelings a lot. I’ve worked with a lot of first-time directors. For example, when I worked on ‘Lamb’, it was the director Valdimar Jóhannsson’s first feature film as he’d only made short films before. Similarly, I worked with Goran Stolevski on ‘You Won’t Be Alone’ that will be coming out in the US in April and he’d also done lots of short films but it was his first feature. In that situation you don’t really have anything to rely on because they don’t have a backlog of work to compare anything to, so you have to be able to trust your intuition. I do have a beautiful strong team around me who I discuss my projects with, and whose advice I listen to sincerely, but at the end of the day it’s very much my decision. I have a lot of personal connections with directors, writers, producers, and most of my projects seem to start with a conversation and during which, we decide to find something to work together on. I’m working with a French producer at the moment called Olivier Bibas, he’s an amazing person and producer. I met him when we were filming ‘Django’, a series for Netflix. Before we worked together, I really admired his work, and we started to build up a relationship before finding the project together. Most things I work on happen very organically and it’s never a case of my agents putting me on blind dates for movie roles! (Laughs)

AL: So you prefer to be really involved in the projects from the beginning and not to wait for projects to come to you?

NR: I’ve never waited! I’m too restless. (Laughing) I have too much energy to wait.

AL: (Laughing) I could see it during the shoot that you have a lot of energy! Can you tell us a little bit about your story and how it all began, do you come from a family of actors?

READ the rest of the interview with Noomi Rapace in Crash 96 available at the Crash Store.