At Art Basel 2022 from June 16-19, Basel’s Messeplatz will feature a participatory floor installation titled ‘Out of Sight’ by Lawrence Weiner, in homage to the artist who passed away in December 2021. Modeled on a hopscotch grid, the work aims to inspire and engage visitors through visualization, physicalizing positive thinking through the use of Weiner’s signature typographic texts. A central figure in conceptual art, American artist Lawrence Weiner’s language of text fragments and colored lines has become immediately recognizable, turning his statements into genuine icons. Discover his 2019 interview with Crash,  where he talks about his incredible career, the changing art world and his obsession with language.

How did you decide to become an artist?

Here’s a simple way to explain it. In my youth, which was a long time ago because I’m old, there was still segregation in the United States and it was a disaster. I was doing labor organization and civil rights. That’s what I was going to do with my life. Then, I really discovered what art meant as a young person. I realized, if I was an organizer I could help maybe two or three people, a family. If I made art, I could disrupt all of society. That’s when it clicked. That’s why the work I make is not aggressive. It’s just stating the facts. I’m very pleased I made that decision when I was sixteen.
When I had my first show in Mill Valley, I had already been around for a while. I have no idea how I made it to California. I don’t know why people helped me to make those first shows. I didn’t know how to drive, I didn’t have a camera, but somehow we did it. From then on it was okay. I went back to New York for a while, and eight years later I came to Paris for the first time in 1963. My show was about the French killing Algerians. This piece had been signed but they were pulling bodies out of the Seine still. We made that show in protest. Then I exposed in Florence and Rome. I took the first 747 to Paris for Yvon Lambert. When I arrived I was like an eight month old child, I had no money…

I’m not a hero, I was lucky. Tennessee Williams wrote a biography and when asked how he survived, he responded: “the kindness of strangers”. I really believed that my entire existence depended on the kindness of strangers. Genuine kindness. I just saw Yvon yesterday, I went to visit his new place. I’m really in bad shape but it was so sentimental, I had to meet him. His daughter was there, she’s fifteen like mine. We remembered a strange thing from the good old days. For my first show, I hired some babysitters and they turned out to be none other than Chantal and Daniel Buren… It was at his first gallery in Saint-German, Rue de l’Echaudé, and we all stayed at Hotel La Louisiane, just around the corner… I have very fond memories of Paris, but I don’t live in the past.

I ran into Jannis Kounellis recently. He was walking out of La Louisiane where he was staying in 2016…

I had a funny relationship with Jannis. He’s a nice man. I would speak French to him he would speak Italian to me. I’m not French and he’s not Italian. He liked to communicate on a fundamental level: simple, human and poetic. He loved my wife Alice. We drove once from Turin to Rome and he spoke to Alice in English in the car and didn’t stop until we got out of the car.

It was about making a work that had nothing to do with magic or alchemy. When you fold waves, they dry up. It was so perfect to be able to build this piece without any kind of mysticism. The idea of folding waves is an object. I also wanted to open the canopy, so the object would not be confined to the “white cube”, but under the open sky.

Is this the first time you used this technique of folding waves?

Yes, I did this piece exclusively for Paris.

How do you explain your attraction to language?

That’s easy. When I was making this work, I wasn’t competing with anybody. I did these paintings that were quite successful in New York and Canada. But that was it, I could not go any further. I wanted to incorporate more and more of the real world and language allowed that. So I began to use language after a while. I guess using language is like learning how to drive. After you drive for a while, you get good at it.

Yes, but it’s never the same.

In the news and on social media, language is like an order. It’s always “this is now, this is that”. Your “linguistic water” shows us an impossible now, like the idea of folding waves?

I think it’s more of an unnecessary now. It’s just what it is. I don’t know. I’m very pleased that my work has found a reason for existing. I’ve had a good experience in New York where I did a project for New York City school children. They wanted me to do a workshop and I said: “I don’t do workshops.” They brought all of these young people to the studio and I made it clear that I was not there to show them how to be an artist. Then I asked: “Do you want to be an artist?” They answered: “No, I want to be this, I want to be that.” Then we started to talk and I said “Now, you have to make money for this program, I don’t have it.” They went and made posters, using a style that they learned from looking at me. It was a success, they raised one million dollars in one night. It was the first time in a long time that people came to do charity with children who came from public school…What a different scene than before, the last time we did an interview, we were on the beach. It was so cold. The boat was cold.

Are you still living between New York and Amsterdam?

Yes, except with the last treatment for cancer I haven’t been able to get back to the boat. My wife Alice went and she fixed the boat but I can’t climb. It’s not very pleasant. Here there’s a young girl who brings a wheelchair. Alice can walk around but I can’t. I’m a lifelong flâneur and I can’t stand being confined to a wheelchair.
The exhibition will continue with posters in forty Paris metro stations, called “After Here & There / Après Ici & Là”. It’s a way for me to keep walking.

You have to travel a lot for your exhibitions… Recently you were in Mexico, Japan, Israel, Naples, and now Paris… What do you think about the lifestyle of the traveling artist?

I don’t like it. I’m a studio artist and that’s where I want to be. When it’s possible, I don’t go out for days. When I’m on the boat in Amsterdam, sometimes I don’t go on the land. I just stay in the harbor. I like to work. That’s what I do most of my life. I wasn’t brought up having vacations. We recently took a break because my treatment was getting heavy. We went to Jamaica for eight days. It was absolutely fabulous. For eight days I didn’t really work, it was the first time in ten years.

No holidays in an artist’s life?

There was a song from the Beatles called “Eight days a week”. (laughs)

In terms of society, how do you feel about America now?

That’s a different story, that has nothing to do with my being an artist. It has to do with my being a citizen. I am disgusted. It has to do with the whole world, not only America. In France it’s the same thing. People are turning on each other. There’s nothing we can do. The only thing we can hope is that Trump dies of a heart attack. But even then… Those people are horrible. Their philosophy is “I may not know anything about this, but I’m telling you what you’d better do.” The racism troubles me, I hate it.

How do you think the art world has changed, after working in it since the early days?

It’s the class that has changed. The world changed badly and the art world changed worse. The art world became totally about business, but stupid business. What they call in America suburban business. It’s business that everybody does but nobody counts. It’s like this president and his wife. His parents got illegal immigration because the father was a car salesman. You don’t get your green card for that. (laughs) You get it for doing something. We have to put up with all the corruption and all these middle-class people. I always make this joke. If you go into a small shop and the children in the shop are helping, they speak to their grandmother in a dialect that their parents don’t speak. They speak to their parents in a dialect that the general public doesn’t speak. They also speak in the language of the country they’re living in. They go to school in that language. And the children teach themselves English and a bit of German from rock ‘n’ roll and television. Then the middle class comes along and they have their Johnny, the genius. The brilliant rich Johnny, who doesn’t even speak another language. These are the Trumps. The Trumps are totally uneducated. They’re just horrible people. They’re the kind of people you wouldn’t sit next to in a restaurant.

What do you think of the digital revolution?

It is what it is. I did a project at MIT called Homeport. We have to have something to say. No one had anything to say there. (laughs)

There is a lack of utopias and projects today…

There is a lack of any enthusiasm, a lack of humor. In humor you must be able to look at yourself, too. Too many people can’t look at themselves.

A lack of reality then?

I’ve been all over the world and I can say that working in Japan was one of the most interesting experiences in my life… In the United States it’s getting violent. New York is not so bad, but everywhere else it’s getting worse and worse. I made a monument for the Canal Port in Chagny in 1993. At the inauguration I said I would be much happier if my son became a male whore than a doctor right now because of the scandal of doctors going on holiday and leaving patients to die of AIDS. You know what happened? Nobody got angry. If we started to say what we’re thinking, things would get better. Most of us don’t say it. You don’t have to point fingers, but you can say “Why am I giving you money to go and kill people for no reason?”

It’s important because if we stop saying what we think, we stop thinking altogether… We’re living like zombies controlled by the self-alienation of the digital age… 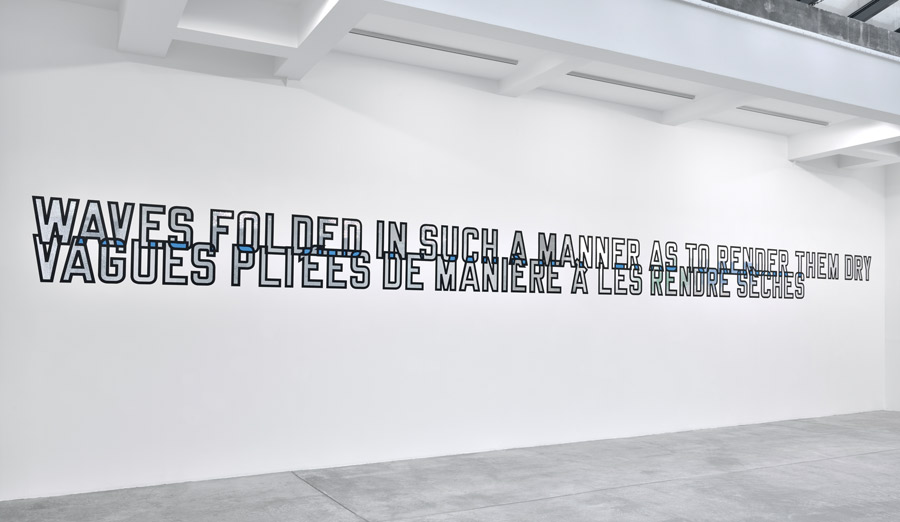 WAVES FOLDED IN SUCH A MANNER AS TO RENDER THEM DRY, 2018
LANGUAGE + THE MATERIALS REFERRED TO
No. 21800 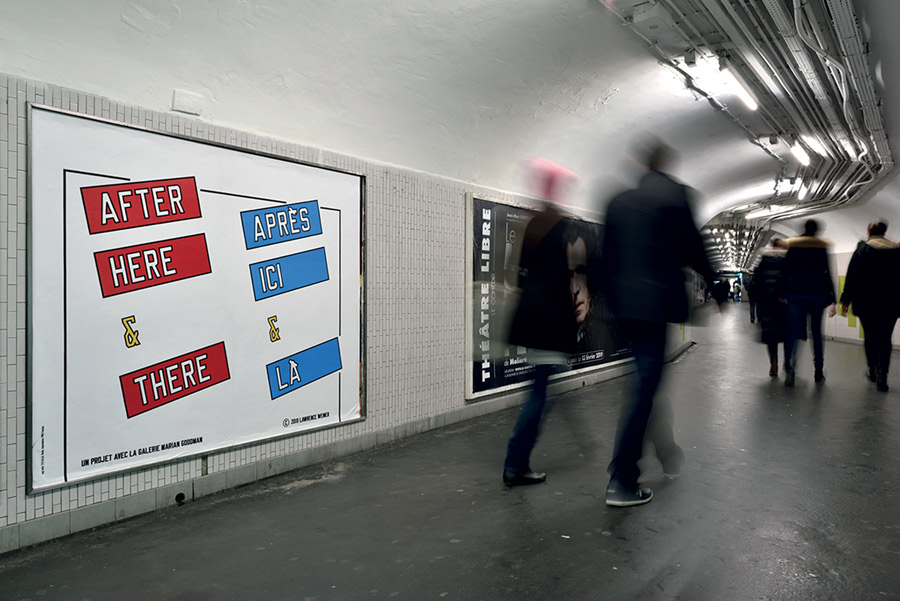 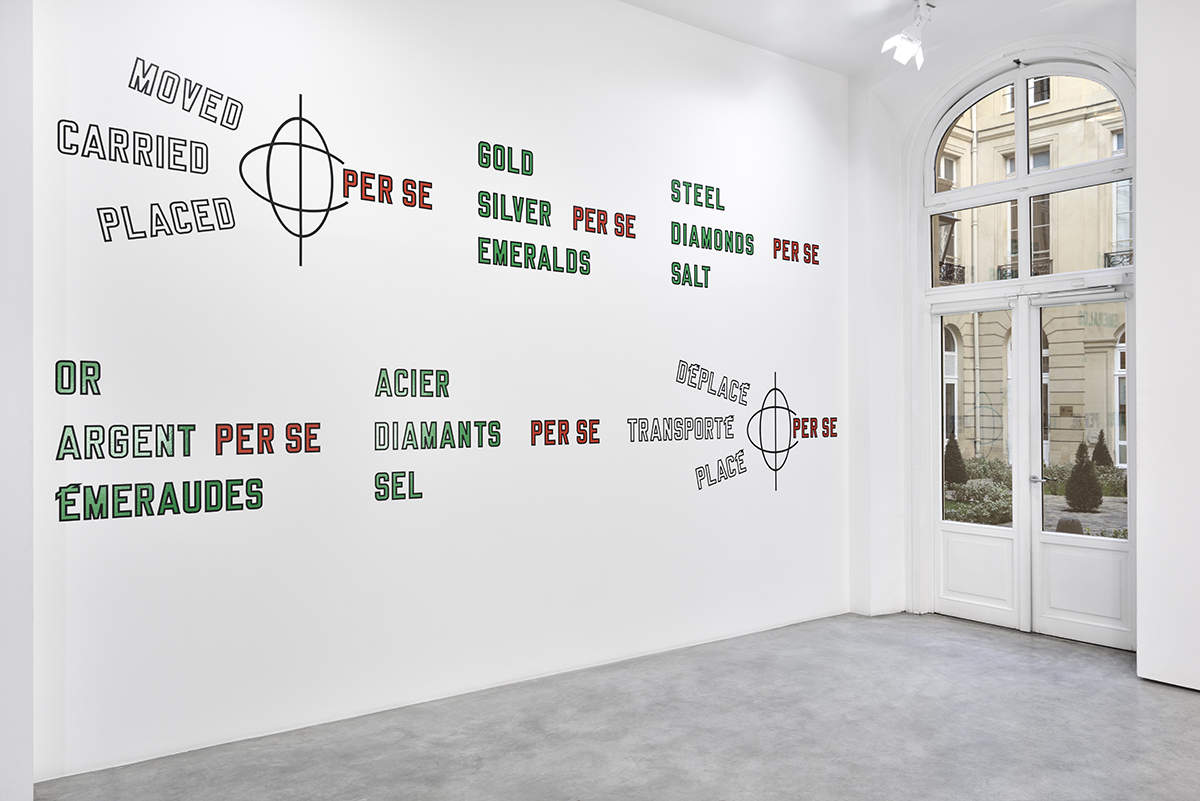