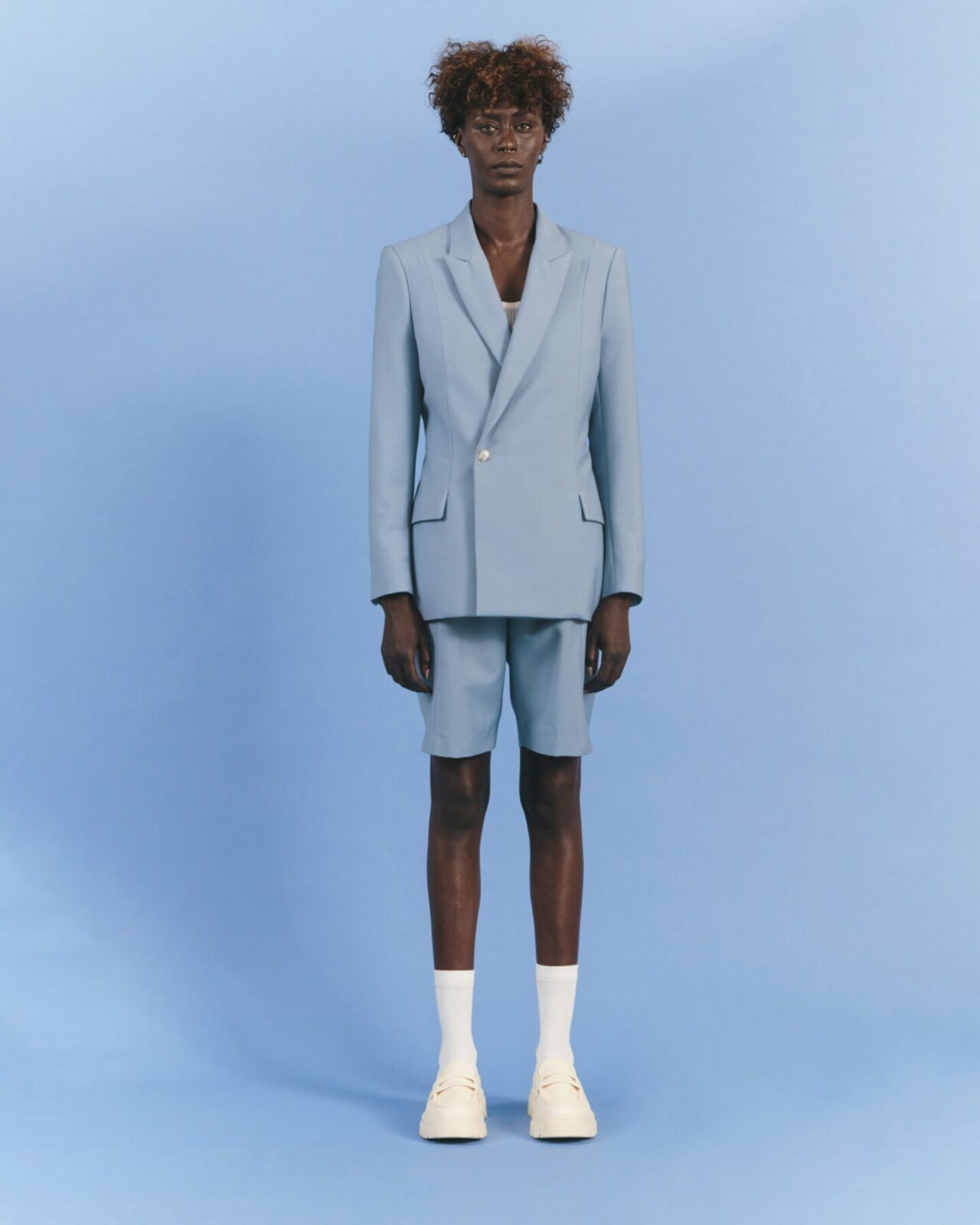 Sphere is the Paris Fashion Week Showroom that takes place four times a year and welcomes French and international brands offering, depending on the session, men’s, women’s or mixed fashion collections. The showroom does not receive any commission and the brands are offered: The realization of wearable photos of their collections, the realization of 360 ° visuals and / or videos that can also be used for their e-shop, training to optimize their physical and digital showrooms, and to make a success of their collection meetings by videoconference, the promotion of the showroom to international buyers, brand presentation meetings and promotion of the showroom to the press. This season, the showroom gathered seven designers invited to the Official Calendar of Paris Fashion Week® from June 22 to June 26, 2022: Arturo Obegero, Egonlab, LGN Louis Gabriel Nouchi, Lukhanyo Mdingi, Jeanne Friot, Steven Passaro and Valette Studio.

Arturo Obegero studied pattern making for a few years before joining Central Saint Martins, from which he gra- duated in 2018. After a year’s experience in the workshops of the House of Lanvin, he chose to launch his own brand. His ready-to-wear is inspired by dance, surrealist and neo-noir movements. His designs make up a romantic, sensual and austere wardrobe for both men and women.

Egonlab is deeply inspired by artistic movements and offers a reinterpretation of these revolutions. Fusing fashion, music, motion design and art, Egonlab is a clever mix, both a unique brand and a movement in itself offering a totally immersive experience. Egonlab juxtaposes masculine and feminine, modernity and historical know-how, romance and rebellion, sustainability and creativity. Their urban-punk DNA aims to dress all body types, all genders and all ages. Egonlab was awarded the Pierre Bergé 2021 prize at Andam Fashion Awards. Egonlab has been on the Official Calendar of PFW since January 2021.

LGN Louis-Gabriel Nouchi, founded in 2017, has been on the PFW Official Calendar since January 2018. A graduate of the Cambre School of Visual Arts, Louis-Gabriel Nouchi began his career at Vogue Paris as well as at Raf Simons. In 2014, he was nominated at the Festival de mode, de photographie et d’accessoires de mode – Hyères and won the Prix Camper and the Prix du Palais de Tokyo. The designer, inspired by both grunge counter-culture and traditional know-how, creates clothes that can be worn regardless of gender. Constantly seeking to improve the materials he uses, and partnering with European luxury factories and large textile groups, LGN offers a new relationship with clothing and the way fashion is conceived. Each piece has a «controlled defect», a magnified wear that allows each one to tell its own story. Product quality, production transparency and honesty are at the heart of the brand.

Hailing from South Africa, the eponymous label Lukhanyo Mdingi was established in 2015. Since its inception, the label has been placed under the auspices of the Ethical Fashion Initiative’s accelerator program as well as the prestigious LVMH Karl Lagerfeld Prize 2021. The intention behind the label is to ensure a conscious approach in product development while looking into the human spirit as the provenance to create design that is honest, stable and strong. The men’s collections have been spotted by Vogue Italia and I.D., among others. Lukhanyo will present its collection for the first time in the official presentation calendar in January. Lukhanyo Mdingi was a finalist for the ANDAM 2022 Grand Prize.

Jeanne Friot is a Paris-based, gender-neutral brand founded in 2020. The brand offers pieces produced in limited series from recycled or upcycled materials. A gra- duate of the Duperré school and then the French Fashion Institute in 2018, Jeanne Friot has worked in several houses including Balenciaga. Passionate about creating images, she has also collaborated as a stylist with editorials such as Vogue Italia and Les Inrocks. The young designer offers an ethical and inclusive fashion made in France since January 2022.

Steven Passaro studied set design at the Duperré School in Paris, then decided to focus on menswear by studying at the London College of Fashion and graduated in 2018. He founded his eponymous brand the following year and presented his first collection in London. Steven Passaro rethinks the men’s wardrobe by mixing perfect tailoring inspired by Savile Row and a 3D virtual prototyping technology. By developing his collections without fabrics, Passaro creates and visualizes his patterns on an avatar, a more eco-responsible solution. The designer joined the official calendar of PFW in January of this year.

Pierre-François Valette launches his label Valette in Paris in 2020 after training at the Ecole de la Chambre Syndicale de la Couture Parisienne, the Isabel Marant studio, and the Saint Laurent fashion house. The young designer, focused on craftsmanship, has a particular appetite for storytelling, the arts and the stage, the foundations of the brand’s identity. His pieces, which appeal to women as much as men, are designed to last. Pierre-François Valette is committed to the transmission of knowledge and values both traditional techniques and the craftsmen with whom he collaborates. Valette Studio makes sure to tell stories and its ready-to-wear echoes a whole series of accessories. The brand has been on the official calendar since June 2021.