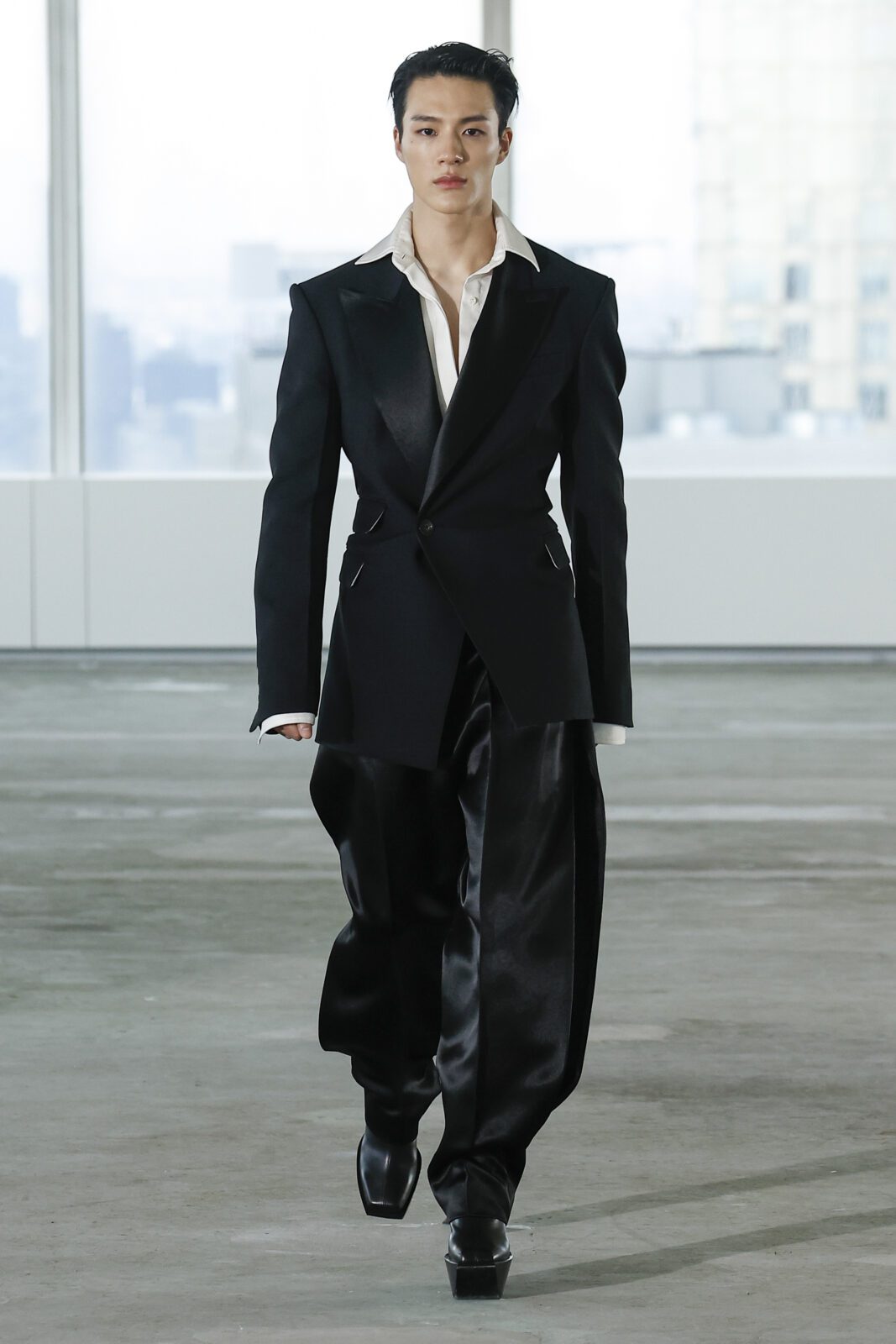 On September 13th, 2022, Peter Do, the New York based luxury brand, debuted its highly anticipated SS23 men’s collection, shown with the women’s collection at NYFW. In partnership with Korea’s largest entertainment company SM Entertainment, Peter Do showcased the women’s, men’s, and unisex collections on several of SM’s biggest stars.

It took its next step into the future of K-pop and fashion by collaborating with the powerhouse entertainment group, known for artists like Girls’ Generation, Red Velvet, NCT, aespa, and more, on the invitations and the runway show. Focusing on the collection’s concept of « TIME, » the personalized show invitation given to guests was presented as a memory box in the form of a cookie tin, after the common household practice of reusing such tins as sewing kits.

The 60-look collection is an exercise in Peter Do fundamentals, highlighting key silhouettes of the brand’s past, reworked for the present for future generations to cherish. Expanding on its signature tailoring offering for women, the collection presents key wardrobe pieces adapted for men across categories of ready-to-wear, shoes, and bags.

« This season, I was thinking about how we always seem to be running out of time in this industry,” Do says. “As a designer and brand, we are always living in the future and never in the present. This collection marks a period where, for the first time in a while, I feel present – where I’ve slowed down to savor those important moments in life.”

The brand’s signature sleek tailoring appears in its signature 4 piece skirt suit, a crisp blazer and shirt with a pleated skirt over trousers, shown on both men and women. The men’s looks focus on sharp short suits, cashmere hoodies, languid silk blouses, and denim staples. Dramatic long pleated skirts, lightweight gowns, and fine knits and jerseys juxtapose with smart suiting and warm layering for women. The closing looks of the collection mirror the opening looks, only deconstructed and bared to exhibit the incredible construction and hand work behind a deceptively simple jacket, coat, or dress.

The collections’ main prints are digitally manipulated photos of important snapshots for Peter Do. “I wanted to memorialize some defining moments; I took the sunset image when we first moved into our new studio, where we made our first runway show happen,” Do says. “This picture of the New York skyline, which we see everyday, reminds us of the importance of this city and its ecosystem to our identity.” Combat and platform boots were given fresh coats of white paint and dip dyes, while coats and boleros were hand embellished with thousands of Swarovski crystals. Shirts and gowns were crushed and entirely hand painted with graphic strokes.

“Sometimes you need to look back in order to move forward,” Do says. “I believe that newness doesn’t always come from scratch. Oftentimes, you can create newness with something that already exists. We’re leaning into our core values of convertibility and versatility for this collection, where a more inclusive collection including menswear was the natural next step for Peter Do.”

After dressing NCT’s JOHNNY for the 2022 Met Gala, where he was the single most mentioned guest of the event, Do, inspired by the way that SM’s artists incorporated fashion into music, chose NCT’S JENO to open the historic show with the men’s – the first time a K-pop artist will open a NYFW show.

Other special appearances included attendance from Red Velvet’s SEULGI, invited by Do as a guest of honor, and SM ROOKIES SHOHEI and EUNSEOK, who made their NYFW debut by walking in the show.