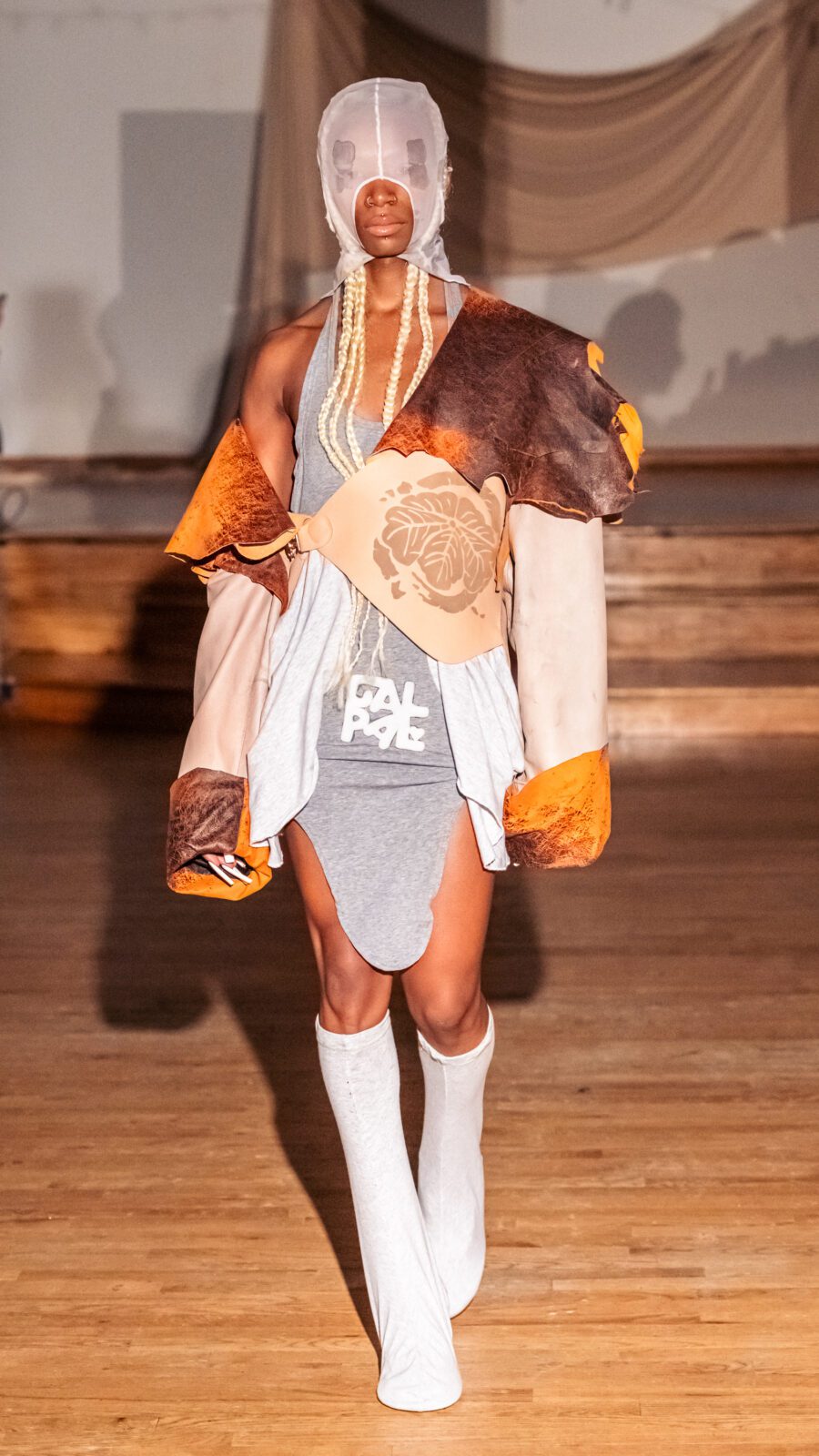 Gogo Graham is an interdisciplinary artist and founder of her eponymous fashion label. Since its inception in 2014, Graham’s label has garnered attention for utilizing discarded and recycled materials in the production of narrative driven collections and one off pieces that merge fantasy with the familiar. She pays special attention to proper fit for those who do not conform to industry exclusive sizing ranges. On Thursday, September 15th, Gogo Graham showcased her Spring/Summer 2023 Ready-To-Wear collection at Nowadays, consisting of 20 looks.

You slipped through my fingers, but even so, I could never hold you. You move with the light of a false sun, flickering across my periphery, unyielding and without direction but you are not free. I grow tired watching you but I can’t look away, like a moth to a flame, a generation to a screen. I close my eyes to find darkness but I still see the things you’ve shown me. I can’t keep them closed for long, I photosynthesize pixels and call it individuality. In this cycle, I become numb, distracted, easily entertained, easily convinced. Swallowed whole, I wander across the abyss as someone yells, “content, content, content! and the algorithm says  “open wide!”

Gogo was intrigued by the notion of “speedrun” videos found in the deep dark of YouTube. These videos feature gamers beating games in draw-dropping times. Games that would normally take an estimated 40 hours to beat, were being beaten in 5 hours. These videos have hundreds of thousands of views. She was intrigued by the collective captivation of the audience, watching the impossible be beaten, a shattering of reality. Naming her collection after the increasingly popular online “sport”, Speedrun is a collection turned commentary, examining the residual effects of speed on our quotidians.

“Speed is more than velocity, it has become synonymous with awareness of, or lack of,  access and efficiency, and has come to define connection itself. We are constantly inundated by content: visual stimulation is a matter of scrolling, and typing something into the search bar is like a pilgrimage. We have become placated by all that we see, mirrors to popular opinion as our minds become newsfeeds feigning knowledge. For designers and creatives alike, being a part of the industry often means having to regulate the cycle by producing multiple collections a year, collaborating with “x” relevant people and to be creating aspirational content. To say the least, being in fashion today is to be under immense pressure – and what this pressure yields is homogeneity, so how do we still find meaning?” Says Graham.

Looking to the legends turned household names that have come before her for reassurance and inspiration, she found a sense of purity in their work. She doesn’t dismiss the notion of trends or pressure their heyday but she still notes that there was a singularity to reference and point of view sans internet. They not only draped garments but also designed worlds and lived in them. On a similar note, the collection’s soundtrack was inspired by Millennium Actress, a film by Satoshi Kon that follows an aging actress as she reminisces about her life after quitting at the height of her career – waxing as she wanes as regret, euphoria and sentimentality become synonymous with one another. Gogo finds resonance in narrative and chords with a collection that offers what she can give, focusing on more wearable, casual pieces, sprinkled with a few formal, demi-couture looks. While homage is too often commodified, true legends transcend.