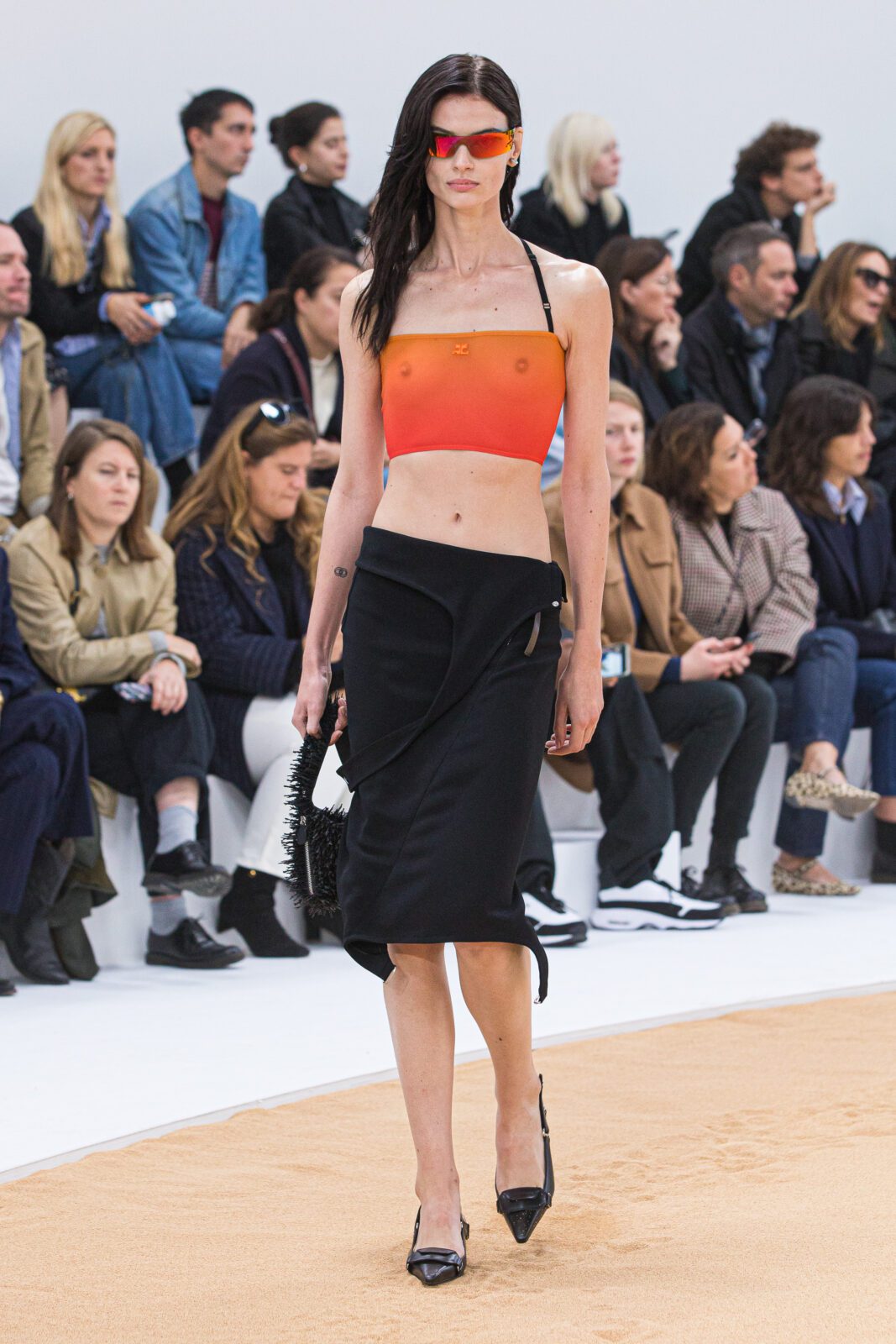 The first time is the forever time.

The second time is the forever time.

The third time is the forever time.

We begin with no endings, but a constant returning.

The plasticity of our perception of time, a value exchange between heritage and invention, between time-consuming craft and time-saving technology, inspires. The result is the projection of an existing legacy, through a new emotion, into an unknown future. And the future has always been the focus of Courrèges – and of fashion.

The set, devised by French artist Theo Mercier, transformed the interior of the now-emblematic seasonal white Courrèges box into an annular beach which, in turn, transformed again, evolving into an hourglass metaphoric of the passage of time. The lyrics of the soundtrack underscored the theme, specially composed by Sene and Hyd.

Time leads back to nature, its passage symbolized by natural structures and elemental effects drawn from the ocean and the beach. Sand and waves contrive to express evolution, to affect garments: denims are washed, Courrèges double gabardine frayed and eroded as if subject to the vagaries of time. Nacre and the internal shapes of shells lent their shapes and forms to jewelry while coral habitats created over thousands of years, were mirrored in silicone dresses and tops, themselves fashioned spaces for the body.

Craftsmanship melded with technology – injection molding, three-dimensional resin printing and scuba fabrics are sculpted and shaped using technique drawn from couture. There is a dialogue between Courrèges’ archetypal shapes and materialisations and new experiments, a rapport that challenges our perception of pieces drawn from the past and those invented anew. Courrèges gabardine and vinyl combined with denims and leather – a neo-heritage, the precise with the raw.

Specific archival references were re-activated, reinterpreted. Courrèges materials and iconic shapes reiterated; a zippered dress from 1974 lent its curvilinear lines to a series of flou dresses and tops that deconstructed around the form; a 1981 wetsuit evolved to a leather jacket, its streamlined form not only recognisable but relevant in a new context – a translation of heritage to the attitude of today.

To look at the past as Courrèges looks to the idea of the future – as a way to create for the now.