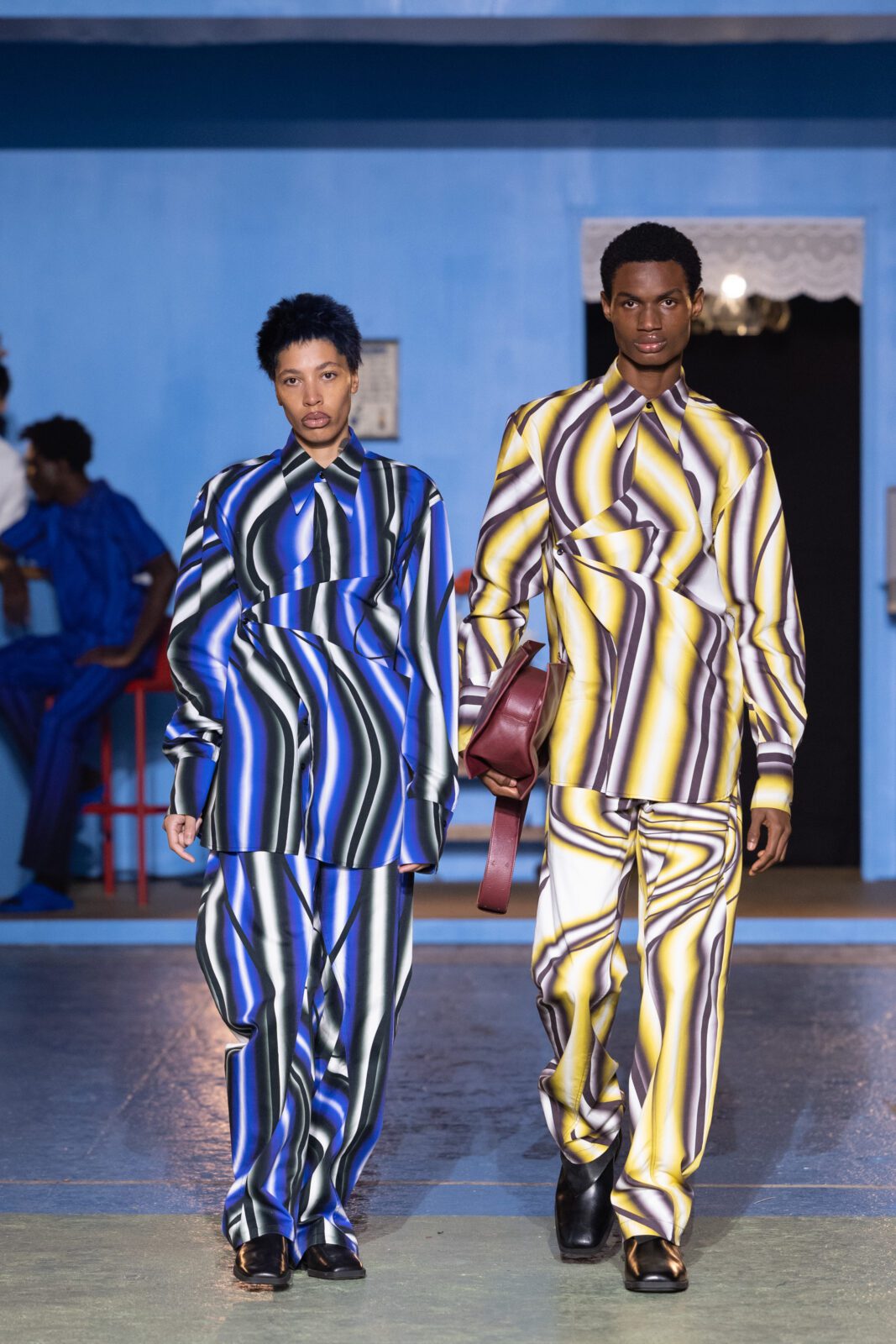 A parallel sensibility lies at the heart of Playwork, Bianca Saunders’ FW23 collection. A meditation on the discrepancies between a viewer’s initial response to an object or space, and the plural perspectives that reveal themselves upon its animation, garments are envisioned as dynamic framing devices for their wearers. Central to this season’s proposal is a continuation of Bianca’s exploration of the malleability of perception – how first appearances give way to layered meanings and ways of seeing. Familiar garments – a squaring denim jacket with frayed seams, a grey wool suit trouser, an écru rib knit sweater – reveal themselves to be anything but common, artfully manipulated through twisted lines, mind-boggling prints and subtly uncanny proportions.

A knee-grazing bomber in black technical nylon turns to the side to reveal a swooping carapace of a silhouette, a result of a back hem that lurches up to reveal the lower back. The bowed legs of indigo denim and papery brown leather trousers are achieved by seams that swirl out from the inner thigh, and the buttons of satin carcoats are swapped out for satin lingerie fastening.

While tailoring has long been a pillar of Bianca’s design vocabulary, this season brings particularly remarkable innovations in formalwear. An architectural suit jacket is reimagined with playful nuance. Constructed with a crisp draped shoulder – the designer’s signature – its kite-shaped lapels are stretched out, its collar entirely removed. The neckline remains the focus for a complementary white satin shirt – or placketless tunic, rather – with its folded collar fastening along the shoulder.

Elsewhere, voluminous wool greatcoats feature gathered pleats down the left breast, creating the illusion of an insouciant hunch. Prints riff on Bianca’s extensive exploration of the possibilities of trompe l’oeil. The fuzz of raw wool fleece appears on silk shirts, and lurid visuals of curtain drapes – inspired by the defamiliarized material textures of Louise Giovanelli’s paintings – appear on jersey twinsets.

This season also features a sophomore capsule of pieces from Bianca’s partnership with leather experts Ecco, as part of AT-Kollektive. An expression of Ecco’s leather savoir-faire and Bianca Saunders’ idiosyncratic design language, the collaborative capsule’s svelte point-toes slip-ins with folded tongues, tent-shaped handbags, and calfskin riffs on a selection of the collection’s key pieces embody the brand’s subtly irreverent ethos.

As for the show – Saunders was this year inspired by Oliver at Large. If you mention Oliver at Large to anyone raised in a Jamaican household, you’ll likely be met with a knowing giggle. The brainchild of Oliver Samuels – the comedian and playwright better known as the island nation’s ‘King of Comedy’ – the quick-witted sketch show is unanimously adored. As much as its genius lies in Oliver’s pithy one-liners and slapstick expression, it also owes much to the humble settings where its outlandish scenarios play out – stripped-back set-up bars, bedrooms, corner shops. Though they may initially appear as off-key facsimiles of familiar places, the amplitude of Oliver’s performance transforms them, tricking the eye into seeing a world far greater than what modest first impressions may imply.

Discover the looks below.