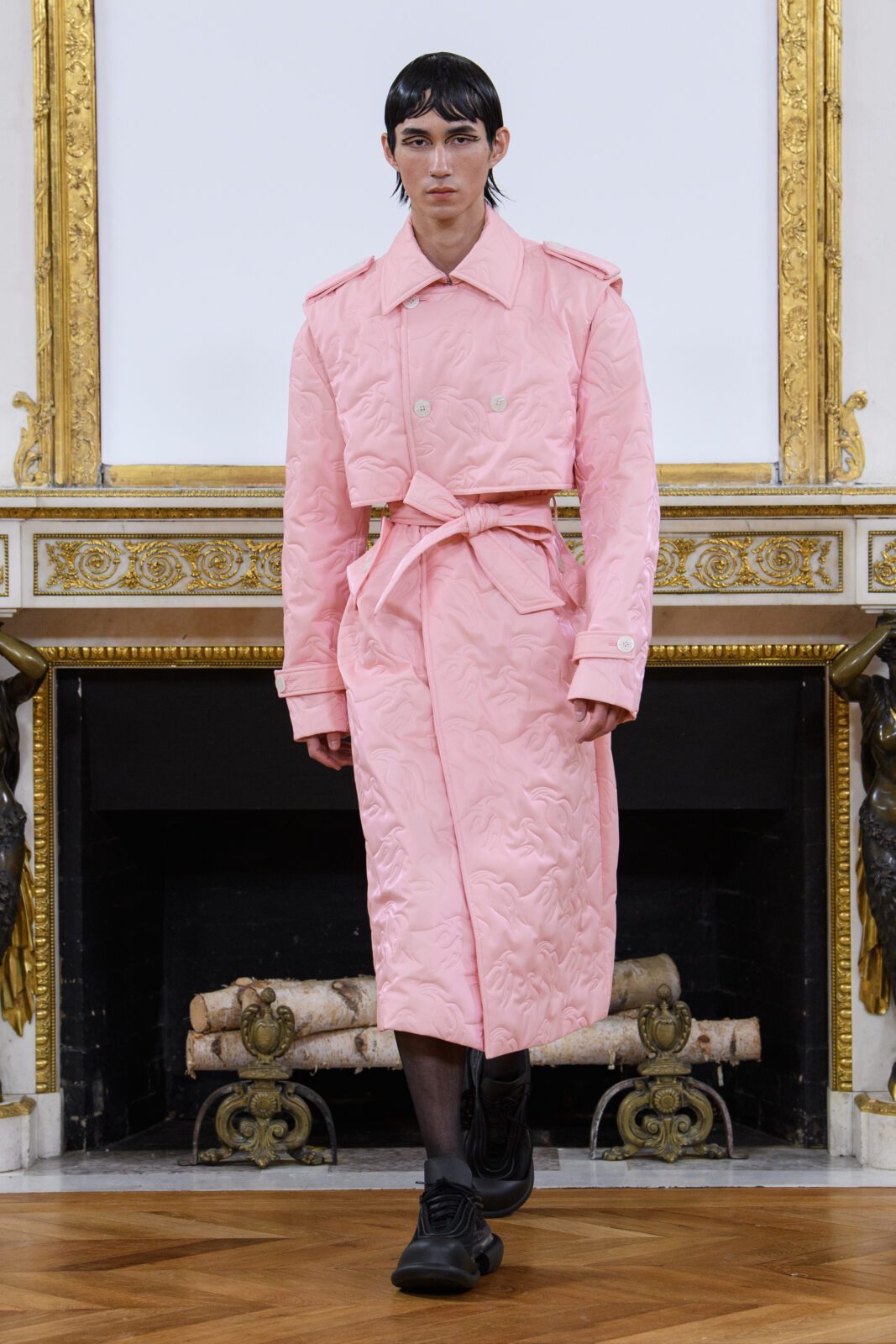 The idea of connection lies at the very heart of Feng Chen Wang’s Fall/Winter 2023 offering – not only between individuals, cultures and communities, but time periods too: the present and the past. The Chinese word ‘缝’ – pronounced ‘féng’, which means to sew, to stitch, to knit together – is key here. ‘鳳’, also pronounced fèng, means phoenix, symbolises the union of yin and yang, and relates to the designer’s own name and her signature motif.

The collection itself featured much of this ‘meeting’ and ‘knitting’; much coming together of disparate parts: from the male and the female, to the eastern and the western; the traditional and the modern. Wang’s gender-liberated sensibility was on clear display, as well as her union of traditional Chinese techniques and modern western styles; and her seamless incorporation of tailoring and denim. Even the colour palette follows this alchemical approach – for amid a cool sea of black, white, grey, indigo and khaki, comes a blaze of warm pink and fiery orange.

This season, Wang was thinking especially about the original Chinese “Hundred Families Robe” tradition, whereby, 100 days after giving birth to a child, parents will visit 100 people – from family members to friends and neighbours – and receive a piece of cloth. These fabric donations are then sewn together into a patchwork robe, a shared symbol of love. Similarly, this season, Wang gathered surplus fabric from seasons past, splicing them together in a way that is not only sustainable but symbolic.

The phoenix – Wang’s signature motif – appeared in a printed quilted fabric and a printed denim, which melded old and new with the incorporation of a traditional Chinese landscape painting technique. On this denim, the motif appeared as a literal ‘blueprint’ via the designer’s also signature indigo dyeing technique. The motif appeared throughout the collection, across clothes, accessories and remade Nike footwear.

In addition, the London- and Shanghai-based designer partnered with Estée Lauder for a limited edition make-up collection with exclusive decoration designed by Wang herself which will be available from April 2023.

This season alo introduced the traditional Chinese knot – a precursor to the modern button. Wang vividly remembers her grandmother waking up every single day and fastening the knots on her blouse. Beyond the function of fastening two different parts of a garment, these knots take on the meaning of bringing two separate entities together; knotting together generations, cultures and communities. Wang’s own version of these knots appear sized-up, making a statement on coats, jackets, and scarfs.

In a time when society is more fractured than ever, and we are leading ever more isolated lives, Wang’s collection extols the beauty of unity, of community and coming together.